Bangladesh should not be a Room 2011 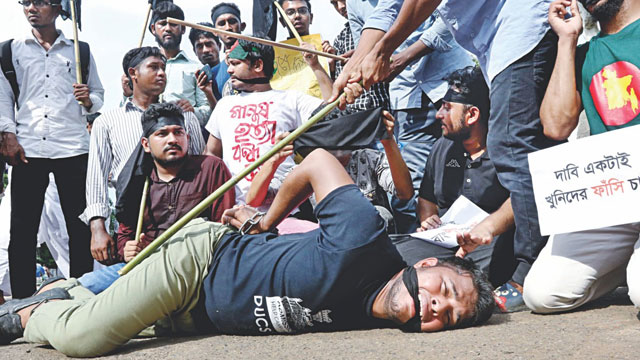 “A government that ignores torture, enforced disappearances, extrajudicial killings by security forces, and arbitrary arrests over dissent begets a culture where students can run a torture cell on a university campus,” said Brad Adams in a statement.

Bangladesh authorities should ensure a thorough, impartial, and transparent investigation into Abrar Fahad’s murder, and hold all those responsible to account, said Adams, executive director of HRW’s Asia Division.

“This deadly incident is not surprising. The Awami League government has long refused to hold Chhatra League supporters accountable for acts of violence and intimidation,” Adams said.

There are complaints of extortion, threatening false allegations, violent attacks around elections and even acting as vigilante law enforcers during the 2018 student protests, he said.

“Bangladesh should not be a Room 2011,” he said in the statement.

On October 6, Abrar Fahad, 21, was summoned from his dorm room at the Bangladesh University of Engineering and Technology (BUET) to Room 2011, known among students as the “torture cell.” The room is run by members of the Chhatra League, the student wing of Bangladesh’s ruling Awami League. A few hours later, Fahad was found dead.

Thousands of students protested Fahad’s killing. His father has brought a case against 19 people and police have so far arrested 13, mostly members of the Chhatra League.