Govt out to kill Khaleda Zia in jail slowly: BNP 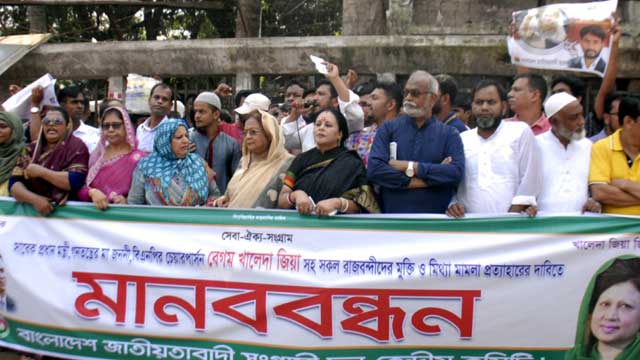 BNP senior leader Selima Rahman on Friday feared that the government has made a plan to ‘kill their seriously ill’ chairperson Khaleda Zia slowly in jail depriving her of proper medical treatment.

“Our leader Khaleda Zia has been kept in jail by convicting her in a false case. She’s not being granted bail,” she told a human-chain programme.

The BNP leader further said, “We’re afraid that there’s a plan to kill our leader (Khaleda) slowly. She’s very sick, but not getting proper treatment. The government is obstructing her release from jail.”

Selima, a BNP standing committee member, said the government is unwilling to free their chairperson from jail as it fears her immense popularity. “They (govt) know they won’t be able to cling to power if Khaleda is released from jail.”

The BNP leader urged their party leaders and activists to get ready for taking to the streets braving all the obstacles and repressive acts to have Khaleda freed from jail.

Speaking at another human-chain programme, BNP standing committee member Amir Khosru Mahmud Chowdhury said it will not be possible to have Khaleda freed from jail through the legal battle, expect a strong street movement.

He also said it will not be possible to restore democracy in the country keeping Khaleda Zia in prison.

Diploma Engineers’ Association organised the programme in front of the Jatiya Press Club, demanding the release of Khaleda.

The BNP leader alleged that the current ‘unelected’ government will not be able to free the country from corruption since it is surrounded by corrupt elements. “We would like to say corruption can’t be removed through 10-20 drives. Even it’s not possible to end corruption and criminalisation with one lkah drives as the top to bottom of the ruling party are involved in it.”

Stating that the government is not elected with people’s votes, Khosru said both governing the country and enacting laws in parliament by an unelected government is an illegal act. “The rule of law can’t remain in a country which is run by an illegal government.”

About the recent bilateral documents signed with India during Prime Minister Sheikh Hasina’s visit to the neighbouring country, the BNP leader said the government has sacrificed the country’s interests since it is neither elected by people nor it is accountable to them.

“There’s an elected government in India which realised from Bangladesh more than it deserves by properly playing the responsibility their voters bestowed upon them. As our government is not elected, it has no responsibility to people. So, it has fully protected its party interests, sacrificing Bangladesh’s ones,” he observed.