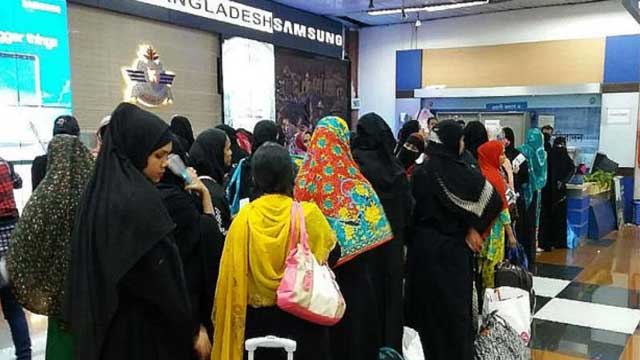 A writ has been filed with the High Court (HC) seeking its directive to stop sending female workers abroad, especially in five Middle East countries -- Saudi Arabia, Iran, Jordan, Lebanon, and Syria -- unless their safety is legally protected.

One Razia Khatun, from Cox’s Bazar, filed the petition on Nov 12, her counsel Zaman Akter Bulbul told the media on Monday (Nov 18).

The petition came amid the several opposition lawmakers on Nov 12 demanded in parliament that the government stop sending the country’s women to work in Saudi Arabia.

Their call came as the number of allegations of Bangladeshi female workers suffering physical and sexual abuse at the hands of their employers in the Middle East countries including Saudi Arabia continues to rise.

In the petition, it was said that women can’t exercise their human rights and legal rights due to a lack of enforcement in the anti-trafficking law.

A number of female migrant workers return home every day. But, no steps are taken for their rehabilitation and compensation, it added

The petition also prayed the HC to issue a rule on the matter.

Secretaries to law, home and expertise welfare ministries, inspector general of police, judge of Chattogram Women and Children Repression Prevention Tribunal and Chattogram Deputy Commissioner were made respondent to the petition.

The HC bench of justices FRM Nazmul Ahsan and KM Kamrul Kader may hear the petition on Tuesday (Nov 19).