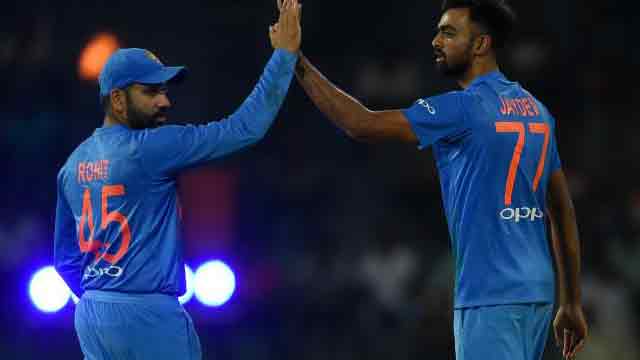 Dhaka, Mar 8 (Just News): A fifty from Shikhar Dhawan set India to a six-wicket victory over Bangladesh in their Nidahas Cup T20 match on Thursday.

Chasing 140, India did lose captain Rohit Sharma and Rishav Pant early, but Dhawan and Suresh Raina made 68 in the third wicket to ensure that India return to winning ways.

Dhawan's 55 off 43 balls featured five fours and two sixes. Raina hit 28 and after his fall, Manish Pandey added 27 to anchor the team to victory.

Winning the toss, India skipper Rohit Sharma asked his opponents to bat first and his bowlers did a great job by restricting the Bangladesh side to 139 for 8.

Liton Das was the highest scorer with a 34 off 30 balls while Sabbir Rahman added 30 in 26 deliveries to save the team from further blushes.

Mushfiqur Rahim chipped in a further 18.

Jaydev Unadkat was the most successful Indian bowler with three wickets while Vijay Shankar claimed two. Unadkat was later adjudged the 'Man of the Match'.

The Tigers will play hosts Sri Lanka in their next game on Saturday.