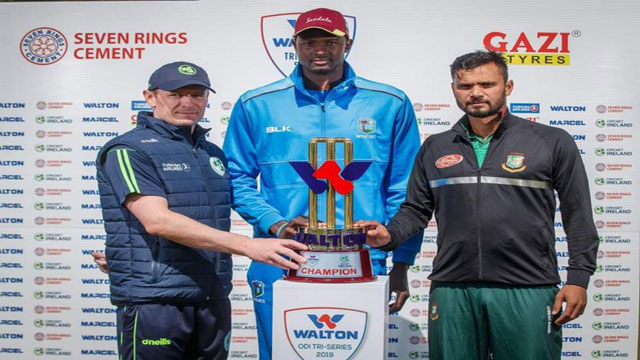 Ahead of their ODI tri-series opener on Tuesday, Bangladesh will take part in a practice match against Ireland Wolves at the Vineyard ground in Dublin today.

The fifty-over encounter will begin at 11:45 am local time (4:45 Bangladesh Standard Time).

The Tigers participated in a training session at the Pembroke Cricket Club, where the cricketers practiced at the nets and also had a fielding session.

Overcoming the chilly weather in Ireland will be the visitor’s biggest challenge with the temperature at nearly seven degrees Celsius in the morning while the mercury drops further in the afternoons.

”We will have a 13-member side for tomorrow’s (today’s) game which we are yet to finalise. All 13 members of both sides will be able to bat and bowl. The players are doing well although the weather here in Dublin is very cold. I am going to buy thermal wear for the cricketers as it’s very chilly here,” team manager and the chief selector Minhajul Abedin told The Daily Star yesterday.

The tri-series is set to begin today with hosts Ireland taking on West Indies while Bangladesh will play their first match of the series against West Indies on May 7 at the Castle Avenue Cricket Club in Clontarf.

All of the fixtures will be day games with matches scheduled to begin at 10:45 local time (3:45 BST).

Bangladesh captain Mashrafe Bin Mortaza and Co. are taking considering the tri-series as a part of their build-up for the upcoming ICC Cricket World Cup in the United Kingdom.