Bangladesh suffer another defeat to Afghanistan 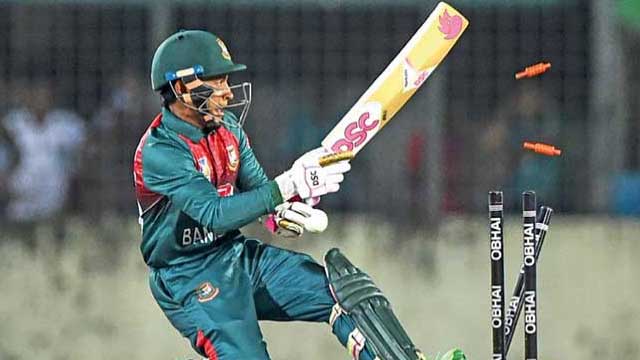 Bangladesh paid the price of their mindless batting, shoddy fielding to taste a 25-run defeat to Afghanistan in their second match of the Tri-nation T20 series at Sher-e-Bangla National Cricket Stadium on Sunday, reports BSS.

Bangladesh bowled comparatively well but the ground fielding was not electrifying enough to stall a ruthless Afghan batting line up. Led by Mohammad Nabi’s swashbuckling 54 ball-84 not out, the Afghanistan piled up 164-6 from a tittering 40-4.

The Afghan bowlers then complemented Nabi’s effort with a disciplined bowling and astonishing fielding to wrap up Bangladesh’s innings for 139 in 19.5 overs.

By virtue of this victory, Afghanistan who also beat Zimbabwe in their first match by 28 runs, went atop of the point table.

Off-spinner Mujeeb Ur Rahman claimed his career best 4-15 while Rashid Khan and Gulbadin Naib took two apiece. Mahmudullah Riyad was the highest scorer for Bangladesh with 44.

In a bid to chase Afghanistan’s respectable total on a pitch that became slower as the time progresses, the team management sent Mushfiqur Rahim in opening alongside Liton Das but that gamble didn’t pay off.

Liton Das was dismissed in the first ball of the innings off off-spinner Mujeeb Ur Rahman bowling while Mushfiqur (5) who hinted to get back to form with lovely cover-drive for boundary, threw away his wicket by playing an extravagant scoop shot against pace bowler Fareed Malik.

Mahmudullah Riyad and Sabbir Rahman, who was struck by a Karim Janat bouncer on his chest resisted and seemed to bring the side back in the zone again. But a slower from Gulbadin Naib got the better of Mahmudullah for 44.

Mujeeb then came back his second spell to dismiss Sabbir for 24, leaving Bangladesh 95-6.

There was no Afif Hossain heroics this time as Gulbadin Naib unleashed another perfect slower to remove him for 16.

Rashid Khan then took care of the rest of the batting line up to hand Bangladesh a big defeat.

Earlier, Asghar Afghan complemented Nabi with 37 ball-40 as the duo combined for a 79-run for the fifth wicket to lay a solid platform after Mohammad Saifuddin and skipper Shakib Al Hasan in combined venture reduced them to 40-4.

Nabi smacked three fours and seven sixes in his knock in a show of clean hitting.

Saifuddin ended with his career best 4-33, while Shakib had figures of 2-18 in a measly bowling effort but they couldn’t stop Nabi from making the carnage that made the Afghan’s total healthy.

Saifuddin rattled the stump of Rahmanullah Gurbaz in the very first ball of the innings with an intriguing leg-cutter after Afghanistan captain Rashid Khan opted to bat first.

Skipper Shakib then took out dangerman Hazratullah Zazai for 1 while Saifuddin dismissed Najeeb Tarakai for 11. Shakib then dealt a killer blow, taking out the wicket of inform Najibullah Zadran for 5.

As it looked Bangladesh established its control over the game, Asghar Afghan and Nabi shattered the hopes with a whirlwind partnership.

Afghan however survived on 31 when Taijul Islam had him caught by Liton Das with a no ball.

Afghan added just 9 runs then before Saifuddin got him.

Nabi was unstoppable and helped the side amass 55 runs in the last five overs to make the score healthy one.