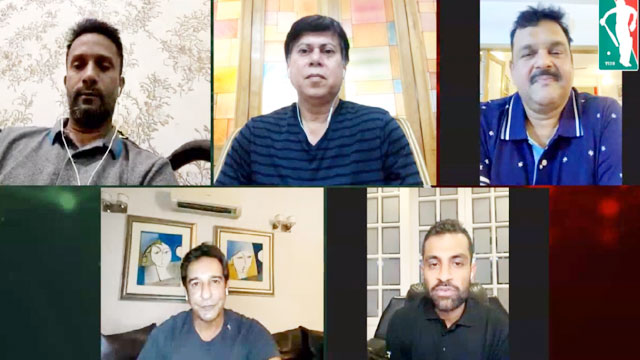 Tamim started the show with Minhjul, Akram and Khaled, Wasim joined them later as a special guest. He was talked to them for about 15 minutes.

“I played a lot of cricket with these guys (Minhajul, Akram and Pilot), and of course I know these guys very well. When I played in Bangladesh for Abahani, I played with them, I played against them as well. We have always been a very good bunch of friends on and off the field. When I come to Bangladesh to commentate, I hang out with them. Bangladesh has always been very close to my heart,” Wasim told during the Live.

“It was always lovely to go to Bangladesh. It is a very proud moment for me to see Bangladesh improved immensely in cricket. In the last ten to 12 years, Bangladesh improved a lot. Now, they play like the world’s top teams. There are many good players like you (Tamim), Shakib Al Hasan, Mushfiqur Rahim, Mustafizur Rahman,” the Pakistan cricket legend added.

He didn’t miss the chance to joke with three former Bangladeshi captains saying when he played for Bangladesh, their fielding wasn’t that great but now Bangladesh’s fielding is really great. Wasim said Bangladesh is now among the best fielding side of the world.

Wasim played Dhaka League back in 1995 for Abahani when Bangladesh has no notable cricket infrastructure. Despite being the best cricketer in the world, why Wasim had come to Bangladesh and played in this country’s league, what had prompted him to do so; it was Tamim’s first question to the legend.

“The first thing was I wanted to see how Bangladeshis are interested in cricket. There was no thinking of financial gaining. I came because a few of Bangladeshi friends invited me to do so and it was impossible to resist them. I played first game for Abahani (and all of Minhajul, Akram and Pilot were his teammates in Abahani). I saw the field was packed with the spectators. I never thought that cricket is so big in Bangladesh,” Wasim further said. During the conversation, Wasim said he is a big fan of Bengali fish recipe Macher Jhol (fish broth).

Wasim looked back to the memory of their defeat against Bangladesh in the World Cup 1999 when Bangladesh registered their first-ever ODI win against a Test-playing nation.

“Bangladesh was the better team on that particular day. They bowled well. Their slow-medium pace bowlers did well all day. It was very disappointing from the point of view of Pakistanis. But yes, Bangladesh played a good brand of cricket on that day,” Wasim further told.

Wasim was the fourth foreign cricket personality to join Tamim’s Facebook Live what he started with his teammate Mushfiqur Rahim. Faf du Plessis was the first foreign cricketer to join Tamim, and later on, Rohit Sharma, Virat Kohli were also a part of this show. Tamim announced that in the next episode he will talk to New Zealand captain Kane Williamson. The show will be aired on Thursday at 3pm (Bangladesh time).