US concerned over intimidation, detain of civil society, political opposition in Bangladesh 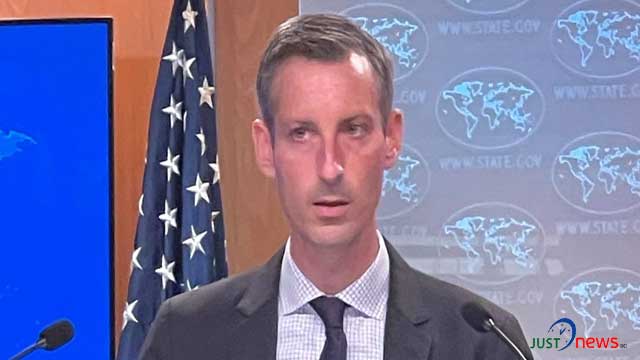 He said, “We urge the Government of Bangladesh to protect freedoms of expression, association, including for members of the press, and to ensure fair trial guarantees for all of those who have been detained under the Digital Security Act.”

Ned Price made this comment in reply to a question on Bangladesh situation while briefing at the State Department in Washington on Tuesday.

At the briefing, State Department correspondent M Mushfiqul Fazal asked, “On Bangladesh, as we know, Biden administration is moving forward putting human rights at the center of the U.S. foreign policy. I am wondering how about Bangladesh as we are observing extreme violation of human rights – disappearances and extrajudicial killings are going on. Everything is controlled by the regime, including freedom of expression, political opposition, civil society, judiciary; now they are trying to control international communities’ voice, as we see, Bangladesh authorities summoned UK envoy over rights report, in the report UK mentioned that country’s main opposition leader Khaleda Zia is in house arrest. It is also mentioned in the U.S. – last State Department’s reports as it’s a political ploy to remove her from the political process.

So I am wondering what is U.S. position on Bangladesh, and Biden administration will be critical on current authoritarian prime minister in Bangladesh?”

“When it comes to Bangladesh, we work closely with Bangladesh to address common challenges. Those include climate change. We regularly discuss the importance of respecting labor and human rights as well. Bangladesh has shown improvement in protecting some human rights over the past year. Given Bangladesh’s own challenges – the decision, for example, to host more than 800,000 – I think it’s 860,000 Rohingya refugees and to provide protection to them since 2017, that deserves special recognition,” added the US State Department spokesperson.

He further said, “So this progress is commendable, but we do remain concerned about the infringement on media and press freedoms. We have noted an increase in reports of charges filed and arrests made under the Digital Security Act against persons expressing personal opinions. Bangladesh’s security forces allegedly continue to suppress, to intimidate, and detain civil society, members of the media, and political opposition. Since the first reported COVID-19 cases early last year, the Government of Bangladesh has aggressively applied the Digital Security Act, leading to dozens of arrests for comments critical of the government’s handling of the pandemic, including using the act against academic professionals for the first time.”

“And so freedom of expression, including online expression, is a key component of democratic governments – governance. We recognize that in the context of Bangladesh just as we do around the world, and we urge the Government of Bangladesh to protect freedoms of expression, association, including for members of the press, and to ensure fair trial guarantees for all of those who have been detained under the Digital Security Act,” the Spokesperson added.