Biden on verge of US presidency, will address the nation tonight 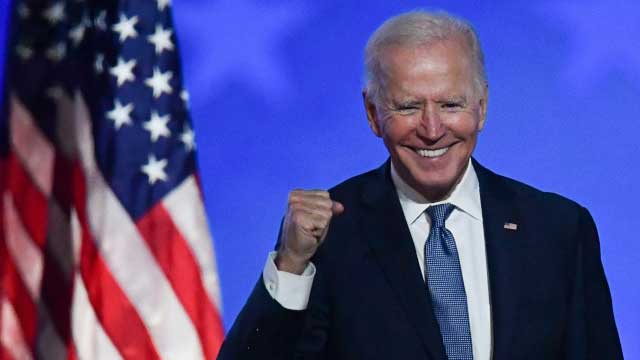 Democrat Joe Biden pulled ahead of President Donald Trump in the potentially decisive state of Pennsylvania on Friday, putting him on the brink of victory in an increasingly tense White House race.

Pennsylvania, and its 20 electoral votes, would be enough to put the 77-year-old Biden past the magic number of 270 votes in the Electoral College, which determines the presidency.

The Democrat has also taken a narrow lead in Georgia with 99% of votes counted, but officials there announce there will be a recount.

Biden also has a slender lead in Nevada and Arizona. Victory in any two of these three states would also win him the White House.

Biden will speak to the nation for a primetime address tonight, said his campaign team.

With tens of thousands of votes remaining to be counted, many of them from heavily Democratic areas, Biden opened up a 5,500-vote lead over the Republican incumbent, real-time state election results showed.

Biden currently has at least 253 electoral votes and is leading in three other states — Arizona, Georgia and Nevada — where votes from Tuesday’s bitterly contested election continue to be counted.

With his reelection hopes fading, Trump is making it clear, however, that he is not ready to accept defeat, launching unsubstantiated claims of voter fraud and claiming that he won.

“This election is not over,” his campaign said, after news of Biden’s lead in Pennsylvania broke.

In an extraordinary appearance at the White House on Thursday, Trump himself claimed that he had been cheated out of reelection.

“They are trying to steal the election,” Trump said.

With a Biden victory looking increasingly likely, the US Secret Service increased its protective bubble around the former vice president, The Washington Post reported Friday.

The Secret Service sent an extra squad of agents to Biden’s campaign headquarters in Wilmington, Delaware, the newspaper said.

The Secret Service, an agency under the Department of Homeland Security, is in charge of protecting the White House and senior government officials, visiting high officials, and others.

Providing no evidence and taking no questions from reporters, Trump spent nearly 17 minutes making incendiary statements about the country’s democratic process — of a sort never before heard from a US president.

According to Trump, Democrats were using “illegal votes” to “steal the election from us.”

“If you count the legal votes, I easily win,” he claimed. “They’re trying to rig an election. And we can’t let that happen.”

Trump repeated those claims in a tweet early on Friday.

Trump’s rhetoric came as his campaign aggressively challenged the integrity of the huge number of ballots mailed in rather than cast in person on Election Day.

The big shift to postal ballots this year reflected the desire of voters to avoid risking exposure to Covid-19 in crowded polling stations during a pandemic that has already killed about 235,000 Americans.

In Pennsylvania, the Trump campaign moved to stop the counting of votes, which authorities were forbidden from processing before Election Day.

Several major US television networks cut away from live coverage of Trump’s White House event over concerns that he was spreading disinformation, and there were signs of cracks in support within his Republican Party.

“There is no defense for the President’s comments tonight undermining our Democratic process,” said Maryland’s Republican Governor Larry Hogan.

“No election or person is more important than our Democracy.”

But several prominent Republicans rallied behind Trump and signalled that they could challenge the legitimacy of results if the president loses.

“I think everything should be on the table,” Senator Lindsey Graham said when asked by Fox News host and Trump loyalist Sean Hannity if Pennsylvania’s Republican-led legislature should refuse to certify results.

“Here’s how this must work in our great country: Every legal vote should be counted,” McConnell said. “Any illegally-submitted ballots must not.

“All sides must get to observe the process. And the courts are here to apply the laws & resolve disputes. That’s how Americans’ votes decide the result.”

Biden, who has promised to heal a country bruised by Trump’s polarizing four years in power, has appealed for “people to stay calm.”

Besides Pennsylvania, Biden also pulled ahead of Trump overnight in the once reliably Republican state of Georgia, taking a lead of about 1,000 votes.

In Arizona and Nevada, Biden was holding on to slim leads.

Wins in Arizona, Georgia, Nevada and Pennsylvania would give Biden 306 of the 538 Electoral College votes — the exact number won by Trump in his 2016 upset victory over Hillary Clinton.

The Trump campaign has filed a slew of lawsuits in battleground states challenging the results and the president’s supporters have staged protests outside several vote-counting centers.

Outside an election office in Arizona’s capital Phoenix, far-right conspiracy theorist Alex Jones roused a heavily armed crowd, shouting on a megaphone about Trump’s supposed enemies: “They will be destroyed because America is rising.”

Bob Bauer, a lawyer for the Biden campaign, has dismissed the slew of Trump campaign lawsuits as “meritless.”-AFP