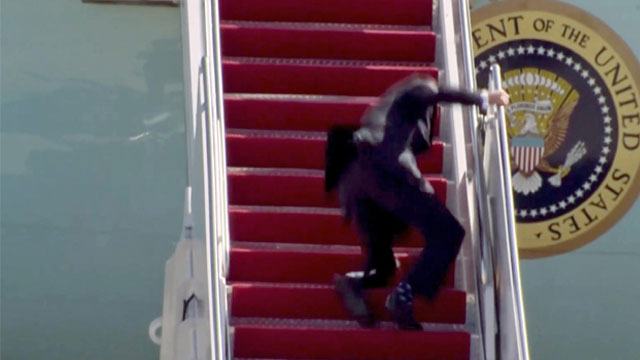 The US president managed to fall not once, not twice but three times on his way up a staircase to the Air Force One presidential aircraft on Friday.

The triple stumble came as Biden, at 78 the oldest person ever elected US president, was departing for Atlanta from Joint Base Andrews in Maryland.

About halfway up the red carpeted stairs, Biden could be seen losing his footing before stumbling three times, eventually ending up on his left knee while still holding the railing with his right hand.

The president got back up, gave his left knee a rub and ascended the rest of the staircase before turning and saluting US marines who had flown him by helicopter to the airport from the White House.

Officials insisted there was no damage done. Karine Jean-Pierre, the deputy White House press secretary, told reporters on Air Force One: “It’s very windy. I almost fell coming up the steps myself. He is doing 100% fine.”

Advertisement
Asked if the president was checked by a doctor, Jean-Pierre said only: “I just – all I know is – I can tell you is he’s doing fine. He’s doing great.”

The incident recalled concerns last November when Biden fractured his foot after slipping while playing with his pet dog, a German shepherd called Major.

His notorious verbal gaffes – this week he accidentally referred to vice-president Kamala Harris as “President Harris” – have also been seized on by conservatives as evidence of age-related decline.

Donald Trump Jr, the son of the former president, tweeted sarcastically about Biden’s fall: “Pay no attention to the fact that the President of the United States is so frail that he got knocked over repeatedly by a gust of wind. Nothing at all to see here, folks!”

Trump Jr also tweeted a spoof video in which his father strikes a golf ball which flies through the air and hits Biden on the head, knocking him over. “It wasn’t the wind folks,” he added.

But Biden is hardly alone in suffering the perils of having TV cameras watch his every move. Mike Pence, the former vice-president, stumbled while climbing the stairs to Air Force Two last June.

That same month Donald Trump gingerly walked down a ramp at the US Military Academy at West Point, later explaining that he knew a fall would be exploited by watching media.

Jeffrey Wright, an actor and activist, tweeted: “I don’t care if Joe Biden trips on the Air Force One stairs stone drunk after an all-nighter, so long as he keeps pounding Covid with this vaccine rollout.”