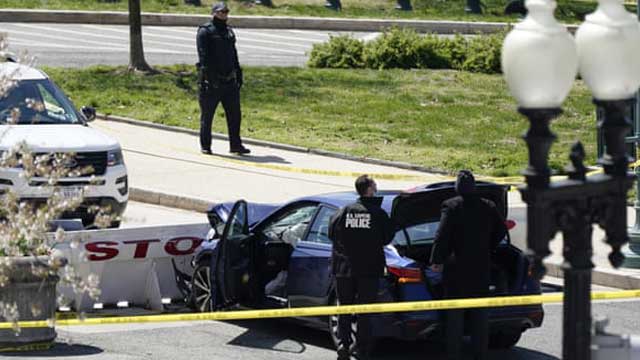 U.S. Capitol Police officers stand near a car that crashed into a barrier on Capitol Hill on Friday. Photograph: J Scott Applewhite/AP

The US Capitol in Washington DC was placed on lockdown on Friday, with staff told to “seek cover” amid reports of an “external security threat”.

Capitol police said two officers had been injured and a suspect was in custody.

The agency said officers were “responding to the North Barricade vehicle access point along Constitution Avenue for reports someone rammed a vehicle into two USCP officers. A suspect is in custody. Both officers are injured. All three have been transported to the hospital”.

News organisations reported emergency vehicles at the scene with one person at least seen on a stretcher. One congressional reporter posted to social media video of a helicopter landing outside the east front of the building. He later reported that it had left.

The Capitol has been on heightened security alert since 6 January, when supporters of Donald Trump stormed the building in an attempt to overturn his election defeat. Five people died as a direct result of the attack, one of them a Capitol police officer who confronted rioters.

Some of the security fencing put up after the attack has recently been removed.

The House and Senate are not in session but some elected officials and their staff were in the building on Friday. Ro Khanna, a Democratic representative from California, spoke to CNN from his car, where he said officers had told him to go after he came back to the Capitol from going out for lunch.

“It’s really sad,” he said. “Once the barriers were removed we were moving back to some sense of normalcy, but this just shows the level of risk that there still is.

“I can’t imagine saying that going to the United States Capitol to represent your constituents is actually a dangerous thing.”

National guard members were filmed marching into the Capitol.

At the White House the press secretary, Jen Psaki, told reporters President Joe Biden was at the Camp David retreat in Maryland, with a national security team.-The Guardian