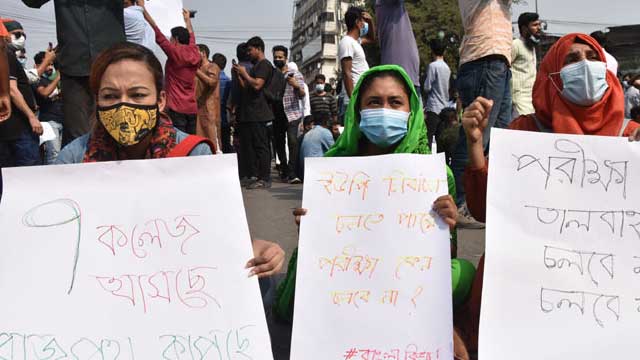 The government on Wednesday decided to continue the ongoing and scheduled examinations at seven colleges affiliated to Dhaka University amid the ongoing protests by the students blocking roads and bringing traffic movements on several city roads to a near standstill.

Protesters blocked roads at Nilkhet on the day forcing buses and other vehicles to take alternative roads causing huge suffering to the public as most areas traffic remained mostly at a standstill throughout the day.

Following an emergency online meeting with the Dhaka University vice-chancellor Md Akhtruzzamna, pro-VC ASM Maksud Kamal and principals of the colleges, education minister Dipu Moni, in her video message, told the press on Wednesday that the examinations at the seven colleges would continue on the condition that no student would be allowed to reside at the dormitories.

‘The universities will take preparations for the reopening the residential halls and the education ministry will provide all required supports in this regard,’ she added.

Earlier on Monday, the education minister in another briefing said that no examination would be conducted till the reopening of the universities on May 24.

She urged the students to leave their campuses and ordered that online classes would continue at the universities, which had begun since the closure of the academic institutions on March 17, 2020 amid the COVID-19 outbreak.

On Tuesday, Dhaka University’s Academic Council decided to continue the ongoing examinations on the condition that the students would not stay at the residential halls.

The council also decided not to announce anymore examination schedule until the reopening the university on May 24 following the government order.

Some students, however, continued pressing on their 72-hour ultimatum demanding the reopening of the university.

On Wednesday morning, over 600 students of the seven DU-affiliated colleges gathered at Nilkhek crossing and blocked vehicular movements on the busy road demanding the continuation of the scheduled examinations, creating havoc on the traffic movement across the capital.

‘The students participated spontaneously at the programme demanding the suspension of the ongoing examinations, said a Dhaka College management student Shohag Talukder.

All of a sudden the government decided to postpone the examinations when the fourth year final examinations of many departments had been ongoing since January and were scheduled to end Wednesday and Thursday, he said.

During the COVID-19 outbreak, Dhaka University as well as the government were seen taking many contradictory and arbitrary decisions that made the students feel aggrieved, experts said.

After the education minister’s Wednesday briefing, Dhaka University pro-VC Maksud Kamal, the coordinator of seven affiliated colleges, held an emergency meeting with the principals of seven colleges and decided to resume the examinations.

After the success of the students of the seven DU-affiliated colleges, students of other universities were encouraged to mount pressure on their respective authorities to continue their movements demanding the continuation of examinations and the reopening of the universities.

‘We will announce a fresh movement plan after the end of our 72-hour ultimatum on Thursday, Dhaka University student activist Junaed Hossain said.

Islamic University correspondent reported that the university students said that they would declare a fresh movement demanding the holding of the examinations and the reopening of the universities.

On Tuesday, they had placed a five-day ultimatum to the university authorities demanding the reopening of Islamic University on March 1.

Education minister Dipu Moni in the Monday briefing, however, warned the agitating students, saying that the university authorities would not take responsibilities of any undesired event.

She said that the universities would take actions following the rules while the law enforcing agencies would also take action under the purview of the law.

Considering the concerns expressed by the students, she said the government would reschedule the Bangladesh Civil Service examinations.