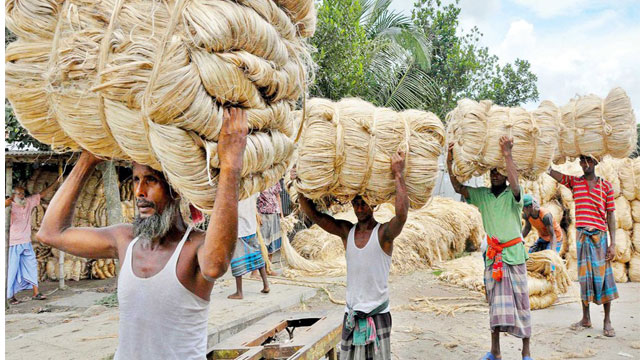 The government has decided to shut down production of 25 state-run jute mills under Bangladesh Jute Mill Corporation (BJMC) by providing cent percent dues of some 25,000 workers of the mills.

The decision came at a meeting held with Prime Minister Sheikh Hasina in the chair at her residence Ganobhaban on Thursday.

“Our BJMC can’t be viable competing with the private sector. These 25 mills can’t run properly. So, some 25,000 workers of the mills have been sufferings as they are not getting salary and dues in time ... So, the Prime Minister announced the shutdown of production of the state-run jute mills,” said PM’s Principal Secretary Dr Ahmad Kaikaus while briefing reporters at the Prime Minister’s Office.

He said cent percent dues of workers of the jute mills would be given at the quickest possible time and it would require Tk 5,000 crore. “The workers will be given their dues in line with the national wage structure of 2015,” he said.

He said the 25 mills will be reopened refurbishing these with modern technologies under different types of ventures –-PPP, G2G, joint venture or lease model.

“The Prime Minister gave directives to place a proposal before her soon on how the closed jute mills can be restarted and can survive competing with local and international markets,” he said.

There are now 26 jute mills under BJMC, but the decision regarding one mill –Monowar Jute Mill—was not taken as there is case over the mill, said Textiles and Jute Secretary Lokman Hossain Miah at the briefing.

The Principal Secretary said the Prime Minister is always against the shutdown of any mill and factory and she reopened many closed mills during her tenures. “The Prime Minister became emotional while giving her consent. But the reality is that these 25 mills can’t run properly and the normal life of the workers concerned have been hampered,” he added.

Noting that the demand of jute is on rise across the world, he said the PM financed the research over the genome sequencing of jute and promotes the multipurpose uses of jutes.

“The Prime Minister took the decision for the sake of the greater interest and the interest of the workers,” he said.

Talking about payment procedures, the Principal Secretary said the payments will directly be sent to the bank accounts of the workers.

The Prime Minister has directed the officials concerned to prepare the list of workers of the state-run jute mills within three days and send their dues directly to their bank accounts, he said, adding that BJMC has started process of enlisting the workers.

Dr Kaikaus also said that all the dues of 8,956 already retired workers of the jute mills would also be given for which Tk 1,020 crore (out of Tk 5,000 crore) will be provided in this regard.

The Prime Minister gave a directive for taking training programme for the workers of the mills for the development of their skills so that they can get jobs in the private sector.

PMO Secretary Md Tofazzal Hossain Miah and high officials of the Textiles and Jute Ministry were present at the briefing.