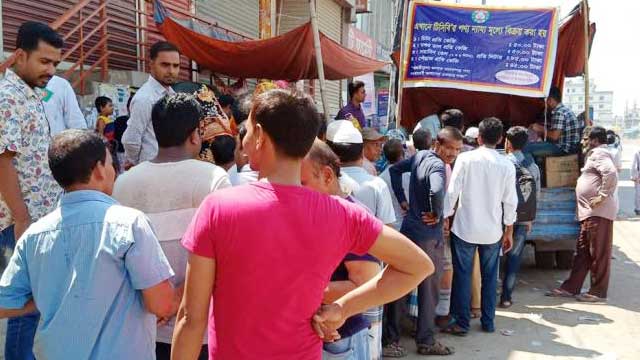 Consumers are facing disappointment after failing to purchase onion at Tk 45 per kg from the Trading Corporation of Bangladesh (TCB) trucks across the city.

TCB started sale of the kitchen staple for the second day on Tuesday (Oct 1) in a bid to control the soaring prices since India banned the export of onions on Sunday (Sept 29).

Bangladesh is one of the top three importers of Indian Indian onions and prices started rising following the floods this year.

TCB increased the number of trucks from 16 to 35 on Wednesday (Sept 2) but people were still seen waiting at fixed points for the trucks to arrive.

Many returning empty handed after waiting in long lines for hours as supply had run out.

Meanwhile, Nazma Begum who had been waiting in line for a long time said, “They aren’t selling more than two kilograms.”

Abdur Rahman, who was purchasing from the TCB truck in front of the Secretariat, said, “We are getting lowered prices but it’s taking a long time.”

Meanwhile, the truck scheduled to sell in front of Bangladesh Bank hadn’t arrived even after 12 pm.

Locals said that the truck had arrived well after 12 pm on Tuesday and maybe the same schedule would be followed on Wednesday.

The scenario was same at the points in Mirpur Mazar Road, and Science Lab intersection.

The sale of onions continued at the points at Dilkusha intersection, in front of the Election Commission at Agargaon, Shyamoli and Mirpur-1.

However, many consumers returned without being able to as stock had run out.