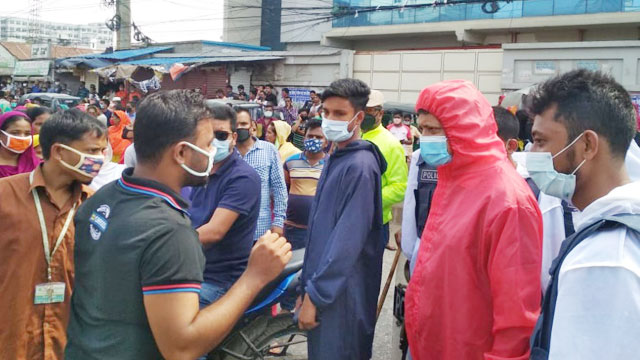 Several hundred readymade garment workers at Gazipura area on Mondaydemonstrated in front of their factory and protested against factory layoff amid the coronavirus pandemic.

Witnesses said that the workers of Tanaz Fashion Ltd went to the factory in the morning and started a demonstration in front of the factory at 9:30am.

Workers said that the management shut the factory soon after it reopened following the Eid-ul-Fitr holiday, without any payment to the workers.

The factory management also announced layoff citing lack of work orders, and also did not mention any timeframe as to when they would reopen.

The notice also stated that dues and arrears of all 3,000 workers were cleared before Eid, which further incensed the workers.

They soon took to the streets and blocked the nearby Dhaka-Mymensingh highway to press home their demands, blocking the 15km route from Abdullahpur to Chandna intersection till 1:00pm.

Assistant Commissioner of Gazipur Metropolitan Police (GMP) Traffic South said that the workers went back when they assured the police assured them they would negotiate with the management to reopen the factory on their behalf.

Despite repeated attempts, the owners of Tanaz Fashion were not available for a comment.