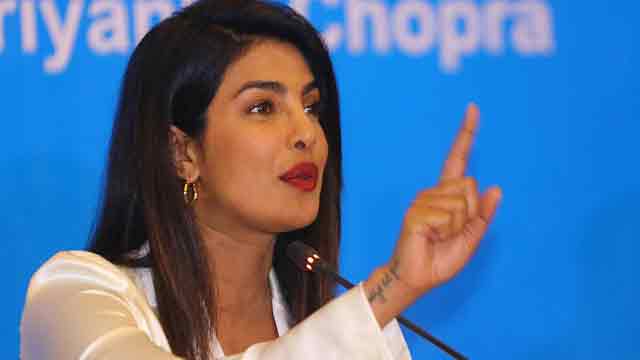 "Open your hearts with compassion. Please be sympathetic and treat these children as your own," Priyanka, also the Unicef Goodwill Ambassador, made the call while addressing a press conference at a hotel in Dhaka this evening.

Wrapping up her four-day visit at different Rohingya refugee camps in Cox's Bazar, Priyanka said there is no space for the Rohingya people. "The world will have to take the responsibility of the Rohingya children," she urged the global community.

Priyanka Chopra today said the world should learn from Bangladesh how to stand beside the distressed humanity.

She also appreciated Bangladesh, particularly Prime Minister Sheikh Hasina, for taking the burden of giving shelter to more than one million displaced Rohingyas in Bangladesh, who fled persecution in Rakhine state of Myanmar, UNB reports.

The Bollywood star came up with the appreciation during a courtesy call on Prime Minister Sheikh Hasina at her Gono Bhaban residence in the afternoon.

PM's additional press secretary Nazrul Islam said Priyanka Chopra shared some experiences of visiting the Rohingya camps in Ukhiya for the last three days, particularly the sufferings of the children, with the Prime Minister.

"I found one kind of healing inside the Rohingya children," the Bollywood star said giving an example of her experience of visiting the Rohingya camps last year.

"Earlier, when I visited the Rohingya camps I asked the children to draw a picture, and they responded with drawing pictures of arms, gunfire and mortar shells from roving helicopters. But this time when I told them to do the same, they drew pictures of sun, animals and nature," she said.

"It's a testimony of their inside healing and it could be possible due to your motherly shelter and security," Priyanka told the Prime Minister.

Mentioning about the hazardous situation for the children in the camps, Priyanka, on behalf of Unicef, called upon the international community to extend all-out support to the Rohingya people.

Priyanka told the Prime Minister that she was concerned about the possibility of a 'generation loss' of a particular ethnicity as a large number of children have no access to education as they are passing their days roaming around.

"The children might have gone astray and even become extremists if they're deprived of the opportunity of having education," she apprehended.

Sheikh Hasina said her government has given shelter to the Rohingyas solely on humanitarian ground as the people of Bangladesh had experienced the same situation in 1971.