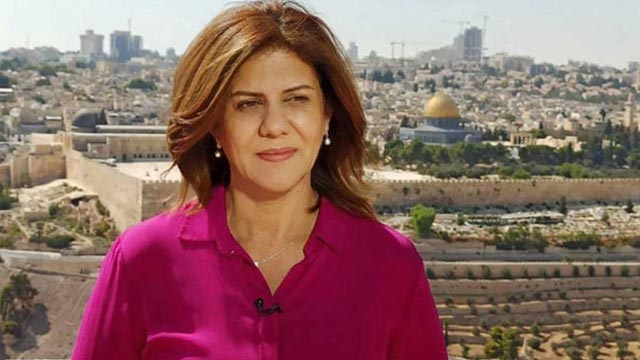 The Palestinian Authority handed the bullet that killed Al Jazeera journalist Shireen Abu Akleh to the United States forensic experts on Saturday as it seeks to prove conclusively that it was fired by an Israel soldier.

The Palestinian Authority was assured that no modifications would be made to the bullet that killed Abu Akleh during an Israeli raid in the occupied West Bank, and that it would be returned as soon as the assessment was complete, Palestinian Attorney General Akram Al-Khatib told AFP.

The Palestinian Authority gave the green light to hand over the bullet to the United States, but not to Israel, the Palestinians’ official Wafa news agency reported.

The Palestinian-American journalist, who was wearing a vest marked ‘Press’ and a helmet, was killed on May 11 while covering an Israeli army operation in Jenin camp in the northern West Bank.

The official Palestinian investigation found that the Qatar-based television channel’s star reporter was killed after being hit by a bullet just below her helmet.

It found that Abu Akleh was killed with a 5.56 millimetre armour-piercing round fired from a Ruger Mini-14 rifle.

US Secretary of State Antony Blinken had promised last month to pursue accountability over the killing of Abu Akleh wherever the facts might lead.

‘We are looking for an independent, credible investigation. When that investigation happens, we will follow the facts, wherever they lead. It’s as straightforward as that,’ said Blinken.

Investigations by the United Nations, as well as several journalistic probes, have found that the shot that killed Abu Akleh was fired by Israeli forces.

‘It is deeply disturbing that Israeli authorities have not conducted a criminal investigation,’ she said.

The probe examined submissions from the Israeli army and the Palestinian attorney general.

However, the Israeli army branded the UN’s findings unfounded, insisting it was ‘not possible’ to determine how Abu Akleh was killed.

‘The IDF (Israel Defence Force) investigation clearly concludes that Ms. Abu Akleh was not intentionally shot by an IDF soldier and that it is not possible to determine whether she was killed by a Palestinian gunman shooting indiscriminately... or inadvertently by an IDF soldier,’ the military said.

Israel has repeatedly called on the Palestinian Authority to give it the bullet but the Palestinians have refused to do so and have rejected any collaboration with Israel in the investigation.