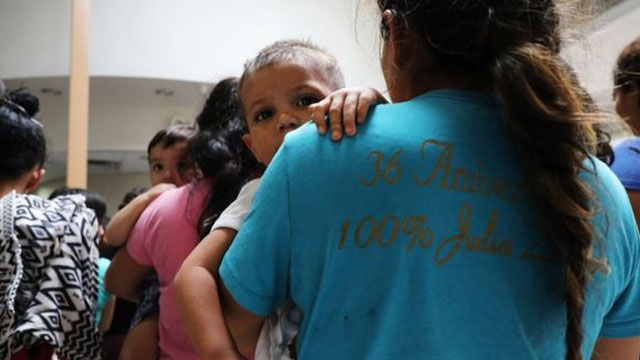 Washington, Jun 26 (Just News): A US border security chief says he has temporarily stopped launching criminal prosecutions of migrants who illegally enter the country with children.

He said it followed an order last week by President Donald Trump calling for an end to migrant family separations.

But Mr Trump had suggested the families would instead be detained together.

The Republican president bowed to public pressure last Wednesday, signing his executive order to "keep families together" in migrant detentions.

Mr McAleenan maintained that the Trump administration's "zero tolerance" tactics were still in effect, although the commissioner's guidance to his agents largely leaves the policy in limbo.

The CBP chief said parents cannot be prosecuted if US officials no longer intend to separate them from their children, who are legally not allowed to be kept in adult detention facilities.

He said his agency and the Department of Justice must figure out how to prosecute the parents without splitting them from their children, the Associated Press news agency reported.

The border official's decision paves the way for US immigration enforcement to revert largely to the approach under the Obama administration.

It means US border agents who stop undocumented adult migrants accompanied by children will hand them a court summons and allow them to go on their way, rather than hold them in a detention facility.

On Monday, White House press secretary Sarah Sanders said the reality was that the US did not have the space to hold all the undocumented families coming across the US-Mexico border.

"We're not changing the policy," she told reporters. "We're simply out of resources."

Mr Trump earlier said that the US needed "a nice simple system that works".

"We want a system where, when people come in illegally, they have to go out," he said.

The Pentagon confirmed on Monday that two Texas military bases will be used as temporary camps to house the immigrants.

But Defence Secretary Jim Mattis did not specify whether the facilities - Fort Bliss and Goodfellow Air Force Base - would house migrant families together.

US media earlier reported that one of the bases would be used to house migrant families and the other would shelter undocumented children who enter the US unaccompanied by an adult.

America's top law official said that refusing to prosecute adults who illegally enter the US "would be a disservice to the people of this country", reports the New York Times.

However, he also said the Trump administration would "do everything in our power to avoid separating families".
What's the latest on migrant families?

The government has yet to reunite parents with more than 2,000 children who have been taken away since last month and sent to holding cells, converted warehouses, desert tents or foster care around the US.

The American Civil Liberties Union (ACLU) sought a federal court injunction in San Diego, California, on Monday to stop the administration from separating undocumented immigrant parents from their children.

Court papers filed by the ACLU contained numerous accounts of parents unable to locate or communicate with their children after they were separated by border officials.

In one declaration filed with the brief, a mother identified only by her initials E.J.O.E. said the government told her she would be reunited with her son as she applied for asylum.

But she says she was deported without her eight-year-old boy.

More than 20 separated children are at a US government tent camp in Tornillo, Texas.

CBS News, which was allowed to tour the facility, said the commander in charge described the "zero tolerance" policy as "a dumb, stupid decision that should've never happened".