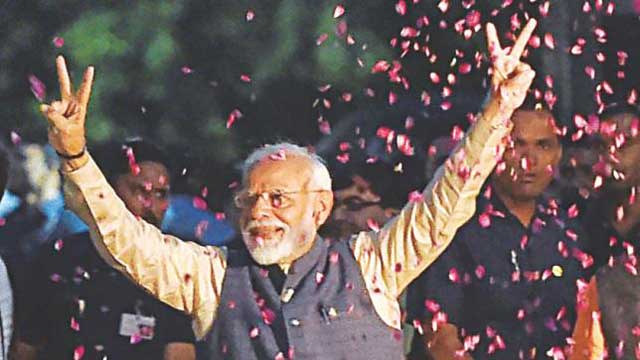 Reforms
In his first term, Modi was widely credited for trying to change a culture of crony capitalism throughout government and numerous reforms, including a nationwide goods and services tax (GST).

These were credited with helping India soar up the World Bank's ease-of-doing-business ranking by 23 places to 77th between 2017 and 2018.

But experts say Modi needs to do more, in particular by reducing red tape and protectionism.

In December, the government announced surprise restrictions on e-commerce that would limit how foreign companies like Walmart and Amazon could operate.

A newspaper recently published a leaked government report, allegedly buried by the government, showing India's unemployment at 6.1 percent, the highest since the 1970s.

Stringent labour laws and insufficient investment in skills are hampering India's non-farm sectors, according to the Organisation for Economic Co-operation and Development.

Oil
India imports over 80 percent of its crude oil requirements and has stopped buying from Venezuela and Iran under US pressure.

New Delhi previously got sanctions waivers from Washington to buy Iranian oil, but these expired May 1.

This has pushed India to source oil from elsewhere, including from Saudi Arabia, pushing refiners to spend more in dollar terms.

Any oil price spike, for example on the back of tensions in the Middle East, could push up fuel prices and therefore inflation, which has long dogged the Indian economy.

"We would not like to see a move towards any escalation in any way... for the simple reason that we depend very heavily on stability in that part of the world," India's ambassador to the US Harsh Vardhan Shringla said Thursday.

Modi seized control of the company to contain the crisis and the central bank created a separate supervisory and regulatory body to ease the liquidity crunch.

Reports in Indian business dailies state the central bank will meet the finance minister to discuss the liquidity and shadow banking sector issues once Modi forms his cabinet.

The "Modi government needs to urgently take a comprehensive look at shadow banking sector and mutual funds industries as there is no safety net and legal system for loan recovery," Shah added.

While Rajan's term was not extended, Patel quit unceremoniously after weeks of speculation and was replaced by Modi ally Shaktikanta Das.

Das has worked with various government bodies and was part of the economic affairs ministry when Modi announced his controversial cash ban in 2016.

Experts believe during his second term, Modi will have to signal the independence of the Reserve Bank of India (RBI) to boost investor and market confidence in the long run.

Conveniently for Modi, as the election approached, the central bank under Das cut interest rates twice in a boost to the economy.

Analysts believe the bank may again cut borrowing costs in June as the government enters its second tenure.

"I hope the new finance minister leaves RBI alone. Interfering with its independence can only produce short-term gains but will hurt the Indian economy in the long run," Bagla added.