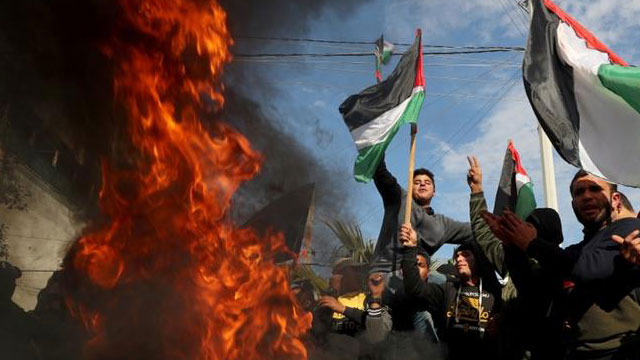 United States President Donald Trump's Middle East plan, also known as the "Deal of the Century", has been denounced by the Palestinians as a "new Balfour Declaration".

Trump revealed his plan on Tuesday with Israeli Prime Minister Benjamin Netanyahu standing by his side at the White House.

Introducing the plan as a "win-win solution" for both Israelis and Palestinians, he said the deal would ensure the establishment of a two-state solution for the Israeli-Palestinian conflict.

Trump led his statement by introducing the Israeli side of the plan, announcing that Jerusalem will remain the "undivided capital" of Israel, adding that this has "already been done".

He also said he hoped to implement the plan "immediately".

Netanyahu, speaking after Trump, thanked the US president for a "historic day", adding that the plan would see Israeli law implemented in the occupied West Bank's Jordan Valley as a means to ensuring the security of Israel.

Earlier on Tuesday, the Israeli military sent troops there as reinforcement in anticipation of possible clashes following the announcement.

'Already in the works'

Palestinian politicians and activists slammed the proposal, with many pledging to "fight against the plan".

"He [Trump] is giving away what he does not own, to people who have no right to it," said Abu Diab.

Following Britain's pledge to establish "a national home for the Jewish people", the Balfour Declaration was issued on November 2, 1917. It turned the Zionist aim of establishing a Jewish state in Palestine into a reality.

"This deal only secures Israeli interests while violating international law and some of the main pillars of a Palestinian state - Jerusalem and the Jordan Valley.

"After decades of sacrificing our lives for this cause, we want our freedom and a Palestinian state along the 1967 border, not some economic gains.

"We completely reject this plan and will continue to fight it," he added.

In June 2019, the economic aspect of the deal was revealed at a summit in Bahrain. It promised Palestinians $50bn in investment.

"We will never give up Jerusalem as our capital, nor the Jordan Valley and areas in the West Bank as part of our state," he told Al Jazeera.

"Trump and Netanyahu have no right to give away Palestinian rights," he said, adding that he expects a strong reaction on the streets across Palestine.

According to Sami Abu Shahada, a Palestinian member of the Knesset, the plan has long been in the works.

"The deal has been under implementation long before its announcement," said Abu Shahada, referring the US move of its embassy to Jerusalem and its annexation of the Golan Heights.

"The goal of this deal is to try to end the Palestinian question. All Palestinians, whether inside Israel, the West Bank or Gaza, reject it, he added. "We will all fight against this."

The Arab Joint List, an alliance of Palestinian parties in Israel, issued a strong statement condemning the plan.

"The Deal of the Century reinforces Israeli occupation and violates Palestinians rights," read the statement."It has nothing to do with peace and is far from establishing a path towards negotiations."

Shortly after the announcement, mosques across the occupied West Bank launched the call to prayer in a move to announce their rejection of the deal and their readiness to fight against it.

Dozens of Palestinians took to the streets in the occupied West Bank city of Ramallah to denounce the plan, while hundreds of others continued to demonstrate in the Gaza Strip.

In advance of the declaration, hundreds of Palestinians took to the streets in Gaza to condemn the plan. Raising banners and burning photos of Trump, the crowds chanted: "Palestine is not for sale. Death to America."

The unveiling of the Israeli-US plan for the region comes at a crucial moment for Trump and Netanyahu, both of whom are facing upcoming elections and domestic tensions.

"Netanyahu realises that this is the final stage of his rule as prime minister and so he wants to leave a legacy behind by ensuring the success of this deal," Israeli analyst Mayer Cohen told Al Jazeera.

Earlier on Tuesday, Netanyahu was formally indicted in court on corruption charges after he withdrew his request for parliamentary immunity from prosecution.

"When it became clear that he was going to be humiliated in the Knesset, he decided to drop his request," said Yair Wallach, senior lecturer In Israeli studies at the University of London.

"The deal is, therefore, very useful for Netanyahu because it may distract from the corruption charges," added Wallach.

For Cohen, the deal is equally important of Trump who faces an impeachment.

"The timing of this announcement is a way to push back against his (Trump's) opponents by telling them that while they try to isolate him, he is still trying to look at the bigger picture and leave a legacy behind," explained Cohen.

Shortly after the announcement, Hamas, which has led the Gaza Strip since 2007, released a statement saying it will take measures to resist the plan's implementation.

As the announcement began, Palestinian President Mahmoud Abbas, started an emergency meeting of the Palestinian leadership in Ramallah - an unprecedented move - which also included West Bank-based officials from Hamas, which pedged to "resist the deal in all its forms."

Speaking from Ramallah following the meeting, Abbas said that Washington's proposal will "not pass" as it aims to end the Palestinian cause.

"Palestine is not for sale. The Deal of the Century belongs to the dustbin of history," said Abbas, who added that he is only open to negotiations if they are "in line with international legitimacy."

"This deal is the final phase of the Balfour Declaration," he added.

Azzam al-Ahmad, a member of the Fatah's Central Committee told Al Jazeera that the Palestinian Authority has proposed an emergency Arab League summit to be held in Cairo on Saturday.

"The Arab League must refute this plan and all Arab states must unite against it," said Ahmad. "We call on the Gulf states specifically to reject this plan, especially that some of them have recently moved to normalise relations with Israel," he added.

Both Trump and Netanyahu thanked Bahrain, Oman and the United Arab Emirates for sending their ambassadors to attend the meeting at the White House.-Al Jazeera