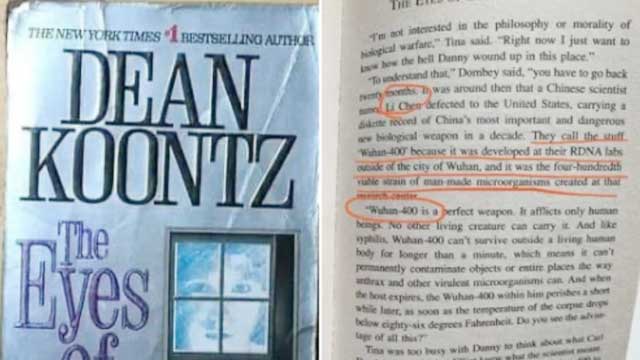 As the deadly coronavirus outbreak grips the world, claiming nearly 1700 lives in China, a 1981 novel has surfaced describing a similar disease called Wuhan-400.

Many, including Congress leader Manish Tiwari, have posted excerpts from the book, Eyes of Darkness by Dean Koontz, asking if it is a man-made bioweapon developed by China. The thriller follows a bioweapon gone wrong after being developed in Chinese military lab in Wuhan, currently the epicentre of the coronavirus.

Koontz is a well-known American author known for his works in suspense fiction with elements of horror and mystery.

In the novel, Wuhan-400 is described as the “perfect weapon” as it requires a host body. “Early symptoms” include dizziness and mild nausea (pg.183). One excerpt reads –

“It’s like strep throat or the common cold or like cancer, because you can get it again and again… if you’re lucky enough to beat it the first time” (pg. 178).

There are also specific details about the gestation period of the virus.

“…you can become an infectious carrier only four hours after coming into contact with the virus. That’s an incredibly short incubation period. Once infected, no one lives more than twenty-four hours. Most die in twelve. It’s worse than the Ebola virus in Africa – infinitely worse. Wuhan-400’s kill rate is hundred per cent. No one is supposed to survive”

However, unlike the coronavirus, which is a respiratory disease, Wuhan-400 is said to attack the brain.

“The virus migrates to the brain stem, and there it begins secreting a toxin that literally eats away brain tissue like battery acid dissolving cheesecloth. It destroys the part of the brain that controls all of the body’s automatic functions….” (pg. 182).-The Print