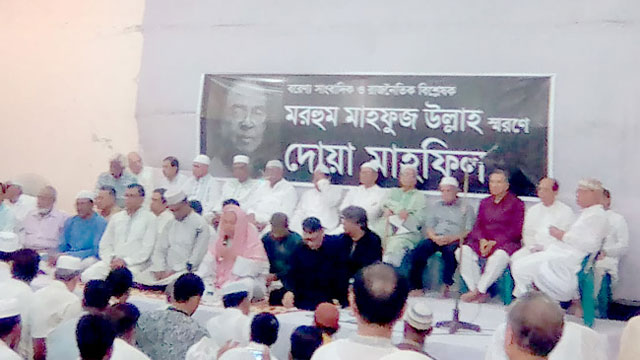 Colleagues and friends of late journalist Mahfuz Ullah on Wednesday remembered him and said that the veteran journalist would remain alive in the minds of the people through his works.

Addressing a discussion prior to his qul khwani at the National Press Club in Dhaka in the afternoon, they said that the journalist during his lifetime showed utter respect to the opinions of his opposition in this divided society.

They said that the journalist was honest, courageous and logical in his professional life and always worked for the betterment of the country.

They also said that his death was a great loss for Bangladesh as well as its democracy.

Also a columnist, writer and freedom fighter, Mahfuz Ullah died at a Bangkok hospital on April 27 at the age of 69. He was suffering from heart, kidney and lung complications.

Gonossasthaya Kendra founder Zafrullah Chowdhury said that the journalist knew that building a nice Bangladesh would need the participation of all and he worked taking all with him.

Dhaka University law professor Asif Nazrul said that Mahfuz Ullah was a pioneer in the country’s environmental movement and he would remain alive in the minds of the people through his works, including 50 books he authored.