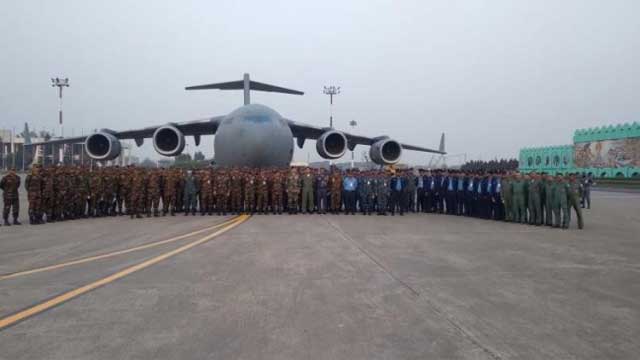 As India is all set to hold Republic Day parade in New Delhi on Tuesday, 122 personnel of the Bangladesh Armed Forces, for the first time, will march on Rajpath alongside their Indian counterparts at the main event, reviving memories of how Muktijoddhas and the Indian army fought shoulder-to-shoulder in the 1971 Liberation War.

This will be the third time the Republic Day parade in India will see the participation of a military contingent from abroad after the French troops in 2016 and UAE personnel a year later, reports our New Delhi correspondent.

The high symbolism of the presence of the Bangladeshi military contingent in the Republic Day parade, which traditionally showcases India's military might, economic development and cultural diversity, is all too evident.

Col Mohtashim Hyder Chowdhury, who is leading the Bangladeshi military contingent, said "Most of the parade personnel are from those Bangladesh units that were raised during the 1971 Liberation War. In fact, we are going to take part in the parade in India at a time when our country is celebrating 2020-21 year as the birth centenary of our Father of the Nation, Bangabandhu Sheikh Mujibur Rahman, and also the 50th year of Bangladesh's independence."

There will be two contingents, one marching contingent and one military band, he said.

It will also be a nostalgic moment for Chief of Staff (Delhi area) Maj Gen Alok Kacker, who is also the parade's second-in-command.

Kacker said his father Brig PN Kacker had commanded the second battalion in 9 Gorkha Rifles that fought in Bangladesh's Liberation War. His battalion had fought against Pakistani troops and crossed Madhumati river for which his unit later won a battle honour.

"I feel proud to be a second-generation officer from the same unit," Alok Kacker added.

The Bangladesh military contingent was flown in an Indian Air Force aircraft for the Republic Day parade in New Delhi.

The visiting contingent had to spend the first week in quarantine due to the pandemic before it began the rehearsal in the run up to the parade.