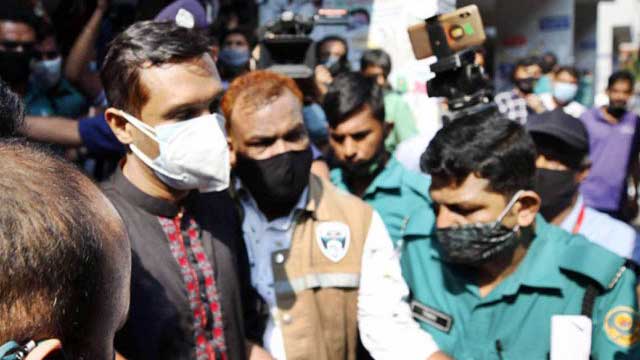 A Chattogram Metropolitan Magistrate Court on Monday sent former police superintendent Babul Akter, who was accused in the fresh the case filed over the murder of his wife Mahmuda Khanam Mitu in 2016, to jail after a five-day remand.

Judge Sarwar Jahan of the court passed the order after the Police Bureau of Investigation produced him before the court on completion interrogation for five days in PBI custody, said Kazi Shahabuddin Ahmed, assistant commissioner (prosecution) of Chattogram Metropolitan Police.

Mitu's father Mosharaf Hossain, a former police inspector, filed the case on May 12 with Panchlaish police station in Chattogram accusing the Mitu’s husband Babul Akter and seven others.

According to the case statement, Babul got involved in an extra-marital affair with a woman when he was posted in Cox’s Bazar as an additional superintendent of police in 2013.

When Mitu protested against the relation, Babul started torturing her mentally and physically, said the statement.

Former police officer Babul Akter, who was in PBI custody from May 10, was shown arrested in the case on May 12.

Rapid Action Battalion arrested another accused, Saidul Islam Sikder alias Saku, in the case from Ranirhat Bazar of Rangunia upazila in Chattogram on the same day.

Mitu was stabbed and shot to death on June 5, 2016 when she was walking her son to his school bus stop at the Port City’s GEC Intersection.

After the murder, Babul filed a case against three unidentified men with Panchlaish police station.

Motaleb and Anwar have made statements before a court, implicating seven persons, including Musa, who, according to the two, directly took part in the killing.

The Police Bureau of Investigation said that Musa was involved in the murder and PBI in its investigation has confirmed Musa was Babul’s source.

On May 12, PBI submitted final report in the case, filed by Mitu’s husband Babul Akter, over the murder in 2016.