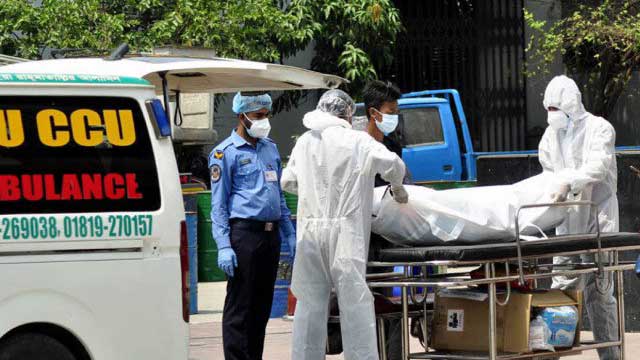 With the latest statistics from the Directorate General of Health Services, the country’s total Covid death toll has hit 18,851 and the total number of infections 11,46,564.

The test positivity rate on the day was 31.05 per cent.

Meanwhile, the government on Friday morning began the ‘strictest restrictions’ on public movement and businesses across Bangladesh to arrest the surge in Covid infections and deaths in the country.

The country, over the past few weeks, has been reporting around 200 Covid deaths and thousands of cases almost every day.

During the Eid-ul-Azha festival, between July 20 and 22, a total of 560 people died and 22,890 were infected with the novel coronavirus.

The government had relaxed restrictions for eight days since July 14 midnight on the occasion of Eid and to facilitate the Eid economic activities despite the fear of experts that such move would further deteriorate the Covid calamity.

During the 24-hour reporting period till 8:00am Friday, 20,493 samples were tested across Bangladesh, with the country testing 73,96,867 samples in total as of the day.

One hundred and twenty-three of them died at public hospitals, 39 at private facilities and four at their home, according to government statistics.

Division-wise, Dhaka logged the highest 60 deaths while 33 each died in Khulna and Chattogram, 12 in Rangpur, 10 in Barishal, eight in Sylhet, seven in Rajshahi and three in Mymensingh.

In the period, 9,006 people recovered from the viral disease, with the total figure in the country reaching 9,78,616.

Besides the deaths from Covid, reports received from different districts of the country said that a good number of patients had died with Covid symptoms at the Covid units of hospitals in those districts.

The DGHS press release did not, however, mention the number of deaths with Covid symptoms.

Reports received from eight districts — Khulna, Rajshshi, Kushtia, Barishal, Satkhira, Chattogram, Mymensingh and Cumilla — said that 101 patients died at the Covid units of hospitals in those districts in the 24 hours till Friday morning.

Of the deceased, 48 were Covid-positive patients, 52 had Covid symptoms and one had post-covid complications, according to the reports.