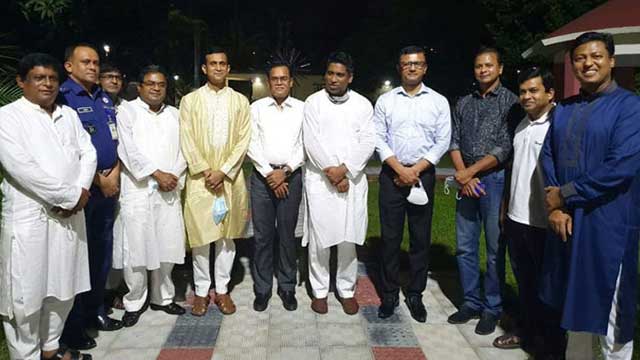 Barisal Mayor Serniabat Sadiq Abdullah has met officials of the local administration and police after a clash in a bid to settle the issue stemmed from a “misunderstanding” between its workers and the UNO, says a statement.

The two-hour meeting from 9pm Sunday was held at the residence of Divisional Commissioner Md Saiful Hasan Badal’s residence, the Barisal City Corporation (BCC) said in a midnight press release.

The meeting aimed at settling the matter, which stemmed from the ‘untoward incident’ following a misunderstanding’ between city corporation workers and Barisal Sadar Upazila Nirbahi Officer (UNO) Munibur Rahman, said the statement.

According to the BCC media release, it was decided that the cases started against Mayor Sadiq by the UNO and the police will be withdrawn.

The city corporation alleged that Ansar members of the UNO’s security detail had assaulted BCC Administrative Officer Swapan Kumar Das and cleaners when the workers had tried to remove banners and festoons from Upazila Parishad compound during a drive on C&B Road on August 18.

At one point, the UNO and members of the Ansar shot at Mayor Sadiq Abdullah with the intention to kill him when the mayor had gone to the spot with officials of the city corporation.

City corporation workers suffered gunshot wounds as they created a human shield to protect the mayor.

Earlier, the UNO and Kotwali Police OC filed two cases over this incident, naming the mayor as the prime accused.

Bangladesh Administrative Service Association demanded the arrest of Sadiq Abdullah in their statement while the local Awami League demanded the removal of the UNO and the OC.

After the meeting, Advocate AKM Jahangir, president of Mahanagar Awami League told reporters that:” The situation arose due to a misunderstanding. Now both sides have agreed to put an end to it.”

During the meeting, both sides expressed the conviction to build a digital and prosperous Bangladesh by working “sincerely with the aim of building a beautiful Barisal forgetting all the misunderstandings of the past.”