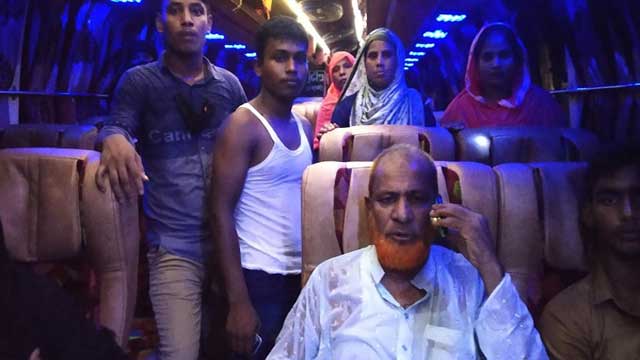 The passengers of thirty-two vehicles including three Dhaka-bound buses were robbed on Monday in the Folimari Bill area of Bholahat-Kansat road in Bholahat upazila of Chapainawabganj.

The passengers and bus staff said that the robbers beat and snatched cash, mobile phones and gold ornaments from them.

According to the Bholahat Upazila Health Complex sources, five people were injured and took first aid following the robbery.

The injured are Monowar, driver of Sathi Enterprise of Khale Alampur area in the upazila, and passengers Razia Khatun, Obaidul, Rabiul and Kanchan of village Birashwarpur.

Police and witnesses said that a ring of 15 to 16 masked robbers, equipped with sharp weapons, iron rod, knives, and bamboo sticks stopped a total of thirty-two vehicles including three Dhaka-bound buses at about 7:45pm, and looted the passengers’ belongings.

Md Arif, helper of Zamzam Travels, said that a group of 15-16 masked robbers stopped their bus, beat the bus staff and the passengers, and looted everything they had.

He added that the robbers also assaulted the female passengers.

Md Alamgir, supervisor of Zamzam Travels, said that they first noticed that the robbers were robbing some trucks, pickups and motorcycles in front of them. ‘But we had nothing to do. Seeing the bus, the robbers stormed inside, beat us and looted money and gold ornaments,’ he added.

He said that the robbers robbed Sathi Enterprise, Zamzam Travels, and Chapai Travels, one after another.

Gani Biswas, a passenger of Zamzam Travels, said that the robbers beat him and his wife and looted Tk 12,000, one gold chain and earrings.

Kanchan, a truck driver who took primary treatment at Bholahat Upazila Health Complex, said that the robbers also beat him and snatched Tk 10,000 and three mobile phone sets from him.

However, Bholahat police officer-in-charge Mahbubur Rahman told that only passengers of the three buses were robbed.

‘Due to the robbery, around thirty or forty small vehicles were stuck on both sides of the road. But only three night-coaches were robbed,’ he added.

The police officer also said that they were conducting raids to nab the robbers.