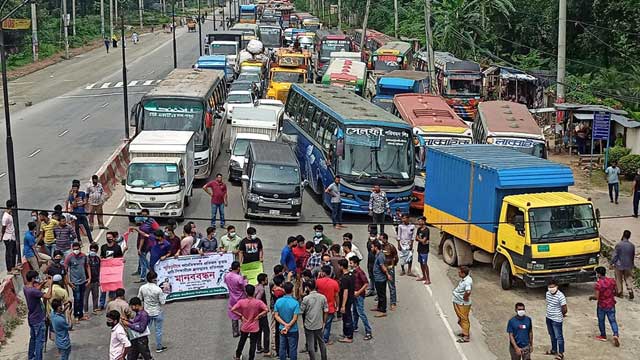 Hundreds of Jahangirnagar University students on Tuesday blocked the Dhaka-Aricha highway protesting the incident of beating up a fellow student by Ansar members at the national monument on Monday evening.

The protesters staged a human chain in front of the main entrance of the university at about 11:30am and later took position on the highway, triggering long tailbacks on both sides of the highway for about half an hour.

They were also chanting slogans demanding expulsion of the alleged Ansar members who beat up a fourth-year zoology department student Nur Hossain for protesting against ‘illegal’ visitor’s entry on the national memorial.

Meanwhile, they placed a four-point charter of demands including expulsion of accused Ansar members and bringing them to book, bearing the treatment costs of the victim and to take steps regarding illegal visitor’s entry at the national monument.

Later, the protesters withdrew their position following the assurance of accommodating their demands by officer-in-charge of Ashulia police station SM Kamruzzaman.

Witnesses said, a group of Ansar members became furious when Nur asked them the validity of permitting visitors taking money during the government-imposed restriction at the national monument amid Covid situation.

Later, they confined Nur in a room allocated for the security guard of the area and beat him using sticks and arms.

Following his screaming, local police rescued Nur and sent him to the hospital at about 6:00pm.

While contacted, Dhaka Zilla commandant of Ansar VDP Afzal Hossain said, ‘We have already expelled four accused members and ‘Black-listed’ them so that they cannot apply for the post again.’

The officer also said that necessary steps were being taken to provide the treatment expenses of the victim student.