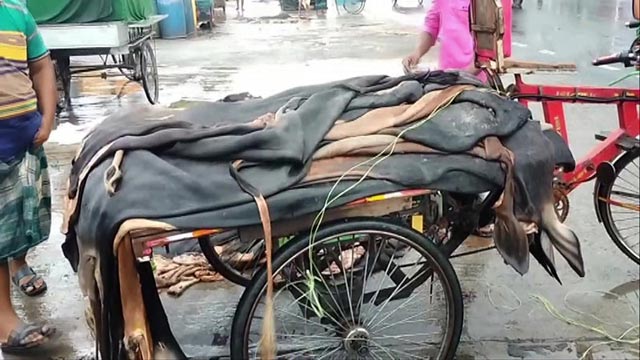 Rawhide was not being bought and sold at prices fixed by the government, but the market situation was fairly good compared to last year.

Traders said there is a demand for rawhide in the markets. There were no such incidents of dumping rawhides into rivers or anywhere in the country over less price.

Aftab Khan, president of the Bangladesh Hide and Skin Merchants' Association, told that the market for rawhide this Eid was better than last year.

Apart from this, goat hide is being bought and sold at Tk 10-20 per piece, he said.

"From what we can see so far, this year the market will fare better than last year," he said.

He, however, said that the price may drop further later in the evening.

A trader in Posta, one of the leather hubs of the capital, Aftab said the price of salt, the cost of labour, and many other expenses have shot up which was a cause for concern.

A person in charge of collecting rawhide of a madrasa in a residential area of the capital's Mirpur saidciting traders that a 20-25 sqft cowhide went for Tk 600-650.

"We haven't sold it yet. We want to sell at a higher price. As of now, based on the situation, we'll get a slightly better price than last year."

"After collecting a rawhide, it will cost Tk 300 more than last year to salt and store them for three months. I'm afraid to buy rawhides because companies don't buy leather at a higher price. I don't think business will be good this time."

"As of now, the situation is such that the companies do not seem to buy rawhide from us at the price fixed by the government," Islam added.

Moklesur Rahman, a member of Garudaha Village Development Committee in Sirajganj district, said the price of rawhide is a bit better than the previous year.

"We sold the same number of cowhides last year at Tk 500 per piece. But there was no price for goat hides."

Raman informed that last year a number of rawhide buyers were present but this time they only got one buyer.

Most of the buyers did not come fearing losses, owing to the raging inflation and Russia-Ukraine war that impacted overall businesses in the country and across the world, he said.

The Ministry of Fisheries and Livestock estimates that some 1.2 crore animals could end up being sacrificed this year, two lakh more from that of last year.

Recently Md Shakawat Ullah, general secretary of Bangladesh Tanners Association, told they have a target of collecting one crore animal rawhides in the Eid-ul-Azha this year.

Eid-ul-Azha accounts for nearly half of the rawhides collected annually, providing a key raw material for the $1.24 billion export-earning leather and leather goods industry in Bangladesh.