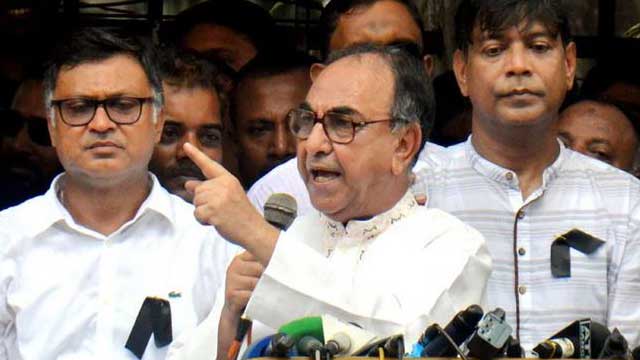 BNP senior leader Mirza Abbas on Saturday said their party is preparing for ousting the Awami League government, not for joining the national election under Prime Minister Sheikh Hasina.

“BNP is not getting ready for an election under Sheikh Hasina. Rather, we are preparing for ensuring the fall of this government,” he said.

Speaking at a rally, the BNP leader also said their party will no longer let the government continue its misrule and repressive acts.

Jatiyatabadi Jubo Dal organised the rally in front of the Jatiya Press Club protesting the killing of its Jashore unit leader Badiuzzaman Dhani.

Abbas, a BNP standing committee member, said the government is trying to hush up the killers of Badiuzzaman by describing his murder as an outcome of intra-party conflicts.

“We would like to make it clear that this is not an internal feud. Awami League has carried out this murder incident to scare BNP workers,” he said.

“We don’t want to see any more killing. This time we’ll come up with resistance and protest. This government won’t be spared anymore,” the BNP leader said.

Abbas slammed Awami League general secretary Obaidul Quader for his remark that BNP has become a fallen political party. “I will say if BNP is a fallen party, why are you so afraid of it? We're not allowed to hold processions and meetings.”

He said BNP has been there in politics with strong existence though its Chairperson Khaleda Zia has been jailed and its acting chairman Tarique Rahman has long been staying abroad.

The BNP leader asked the ruling party workers to think of the consequences when their top leaders will flee the country in fear of facing public wrath.

He said Awami League should not afraid of an election under a neutral or a caretaker government as its leaders used to brag about a huge development in the country under its rule. “We’ll go to elections under such neutral government when the parliament will be dissolved and Sheikh Hasina won’t remain the prime minister.”