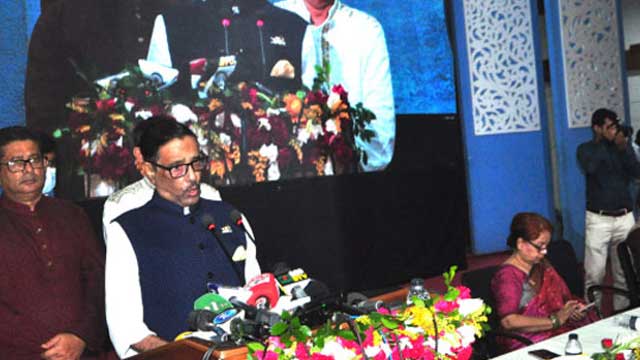 "The elections will be held in the country like in other democratic countries across the globe. So, BNP leaders especially Mirza Fakhrul Islam Alamgir should take down the ghost of the caretaker government from their heads and participate in the elections by following the simple path," he said.

The minister said this at a discussion organized by Awami Swechchhasebak League, the volunteers' wing of Bangladesh Awami League, at the auditorium of Bangabandhu Sheikh Mujib Medical University (BSMMU) here on the occasion of the 76th birthday of Prime Minister Sheikh Hasina.

During the polls, the government will conduct its routine duties, he said, adding that the Election Commission (EC) will have the main responsibility.

Besides, the law enforcement agencies of the government will also be under the Election Commission, he said.

"Who will run the country in the absence of a government? Should we give the country to your (BNP leaders) hands?" he questioned.

Quader further said that BNP leaders and workers will hold rallies at the divisional level and also observe the blockade programmes in December.

"A journalist asked if the previous blockade was not withdrawn by BNP, why they have to begin the blockade again. I request you (the journalists) to ask Fakhrul why they are doing these." he said.

Issuing a warning to BNP, he said: "Come to the field. If you come with sticks then befitting reply will be given. We cannot accept national flag fastened with sticks. We will not accept insulting the national flag of Bangladesh."

He urged all AL men not to do any misdeed as if anyone does that the achievements of Sheikh Hasina will fade away.

"I would like to make it clear that those who commit crimes in the name of affiliated organizations of Awami League will not be spared. Success cannot fade because of the evil-doers," he added.

Later, gifts were given to the newborn-babies, who were born in different hospitals in the city on September 28 on the occasion of the birthday of the premier.