‘We were blindfolded, taken to DB office’ 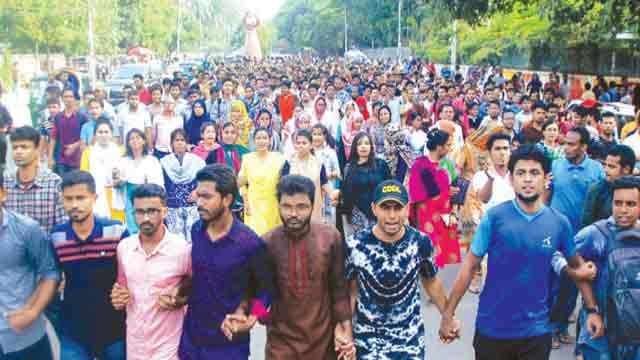 Dhaka, Apr 16 (Just News): Three leading organisers of the quota reform movement who were picked up by law enforcement earlier in the day were blindfolded after they were whisked away in a microbus.

Addressing a press conference on the Dhaka University campus shortly after they were released Monday, the trio - Nurullah Noor, Rashed Khan and Faruk Hossain - made the allegation.

They, however, said the law enforcement did not torture them physically while in custody.

Nurullah Noor is a student of English department at Dhaka University while Rashed Khan is an MBA student and Faruk Hossain a Disaster Management student of the same university.

All of them are joint convenors of the platform of general students - Bangladesh Sadharan Chhatra Odhikar Sangrakkhan Parishad (General Students' Rights Protection Council Bangladesh) - under which students waged a movement demanding reform of the quota system in the public services.

Addressing the press conference in front of the Dhaka University library, they alleged they were blindfolded with gamchha (locally-made towel) after they were forced into a microbus around 12:45pm.

They said they discovered themselves in a room when their blindfolds were untied. They were told they would be shown a video footage. However, they were shown nothing.

They said they were taken to the office of Detective Branch (DB) of police on Minto Road in the capital from where they were released around 2:45pm after their personal details were noted.

The three organisers said they and their family members are living in a sense of fear and insecurity.

Rashed Khan alleged that his father - a day labourer by profession - too has been picked up and taken to Jhenaidah sadar police station.

Police, however, claimed that these three organisers were taken to their place for “negotiation”.

A group of students brought out a procession on the Dhaka University campus protesting the trio being picked up.

The trio was picked up from in front of the Dhaka Medical College Hospital gate when they reached the area after a press conference on DU campus where they demanded withdrawal of cases filed against the quota protesters within two days.

Bin Yamin, another joint convener of the platform who witnessed the three being picked up, said they were going to Chankharpool to have their lunch.

He said Rashed, Nurullah and Faruk were in a rickshaw while he was in another one behind them.

As the rickshaw carrying the trio reached near the gate of the emergency department of the Dhaka Medical College Hospital, three motorcyclists intercepted it and in no time a white-coloured Hiace microbus appeared in the scene.

Several men in plainclothes hastily got off the microbus and whisked the three protesters away in the microbus.

An employee of a restaurant opposite the hospital gate, Md Salauddin, gave the same account of the incident.

Salauddin said some seven to eight people getting off the microbus and motorcycles intercepted the rickshaw and whisked the trio away. He said a scuffle took place between them during the incident.

Students and job-seeking youths from across the line of political affiliation took to the streets around the country in the past couple of weeks demanding reform of quota system in the public service.

And the sturdy street campaign waged under the banner of the Bangladesh Sadharan Chhatra Odhikar Sangrakkhan Parishad witnessed clashes at places leaving dozens of students injured, many in shooting as well.

Against this backdrop, prime minister Sheikh Hasina told parliament on 12 April that there would no quota system in the public service, but no progress has been made so far to this end.