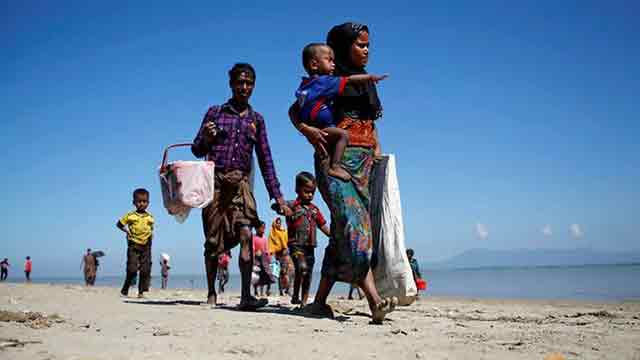 Nayapara Refugee Camp, Jun 28 (Just News): The United Nations and the Bangladesh government have started formally registering hundreds of thousands of Rohingya refugees who have fled a military crackdown in Myanmar, a move that officials say would help their eventual return.

More than 700,000 mostly Muslim Rohingya have escaped Buddhist-majority Myanmar since last August, when attacks by Muslim insurgents triggered a military offensive that the United Nations has likened to ethnic cleansing. Myanmar denies the accusations and has said it waged a legitimate counter-insurgency operation.

The registration programme started jointly by the United Nations High Commissioner for Refugees (UNHCR) and the Bangladesh government this week is aimed at creating a reliable database of refugees living in camps on Bangladesh’s southern coast, said Caroline Gluck, a UNHCR representative.

That data, expected to be ready by November, will have family and birth details of refugees, and will be shared with Myanmar, said Abul Kalam, Bangladesh’s refugee relief and repatriation commissioner. “This will aid the repatriation process,” Kalam said, stressing that any returns would be safe and voluntary.

Dozens of refugees queued up at a UNHCR office at the Nayapara camp, which overlooks the Myanmar border, providing fingerprints, iris scans and other information to officials.

The white registration cards refugees are being given have the logo of both the UNHCR and the Bangladesh government, and state: “This person should be protected from forcible return to a country where he/she would face threats to his/her life or freedom.”

Many refugees have reported killings, arson and rape by Myanmar security forces and Buddhist vigilantes, and say they will not return unless they are granted citizenship in Myanmar. The UNHCR said last month conditions were not yet safe for Rohingya to return.

A senior Myanmar official has told Western diplomats that a proposal to review a citizenship law that effectively renders most Rohingya Muslims stateless could not be implemented, five people present at a meeting in Denmark in early June told Reuters.

“I asked them - are you doing this to send us back to Myanmar?” Shamsul Alam, a refugee, said he asked UN officials who took down his details. He said he was told that, while the information would be shared with Myanmar, the programme was not aimed at repatriation, but would help him get food and other assistance.

“This is important for the refugees to get access to basic services,” UNHCR’s Gluck said. “Aid agencies need to know how many people are in the population and require assistance.”

Refugees have many questions about the programme, some officials on the ground said. Nur Hashim, another refugee, wondered why the cards did not list his identity as Rohingya. “They told me UNHCR refugee registration cards don’t mention ethnicity anywhere in the world,” he said.

Myanmar and Bangladesh struck a deal in November under which Myanmar would take back Rohingya refugees after verifying their family details. But in March, Myanmar said it had been able to verify details of only 374 refugees from a list of more 8,000 names handed over by Bangladesh, because the information was incomplete.

Bangladesh officials have expressed doubts about Myanmar’s willingness to take back the Rohingya, who are denied citizenship in Myanmar.

“Our working assumption is (the refugees) are not going anywhere soon,” Steve McAndrew, head of emergency operations in Bangladesh’s Cox’s Bazar for the International Federation of Red Cross and Red Crescent Societies, told a press briefing in Geneva on Monday.