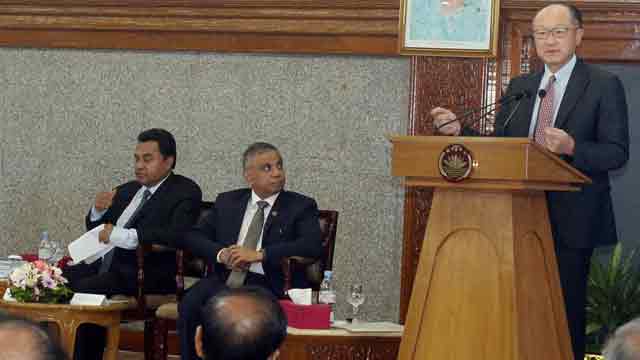 Dhaka, July 1 (Just News): Saying that the current Rohingya situations in Bangladesh are ‘crying out’ for response, World Bank Group President Jim Yong Kim today said there is a need to continue the move to make sure that the Rohingyas are back to their country in a peaceful way.

“The situation (Rohingyas) is a humanitarian tragedy and we need to move on this to make sure that the Rohingyas are back in a peaceful way,” Kim said in a joint video statement with Finance Minister Abul Maal Abdul Muhith after meeting the veteran minister at his secretariat office here today.

He said “We have great faith in the direction that Bangladesh is going under the leadership of the minister (Muhith) and the Prime Minister,” Kim said.

The World Bank president reiterated that the lending agency is providing $3.0 billion loans to Bangladesh in this year which is also the second largest among all its clients.

Jim Yong Kim and UN Secretary General Antonio Guterres are now in Bangladesh to visit the Rohingyas living in the camps in Cox’s Bazar.

Kim said that he and Secretary General Guterres were extremely concerned by the Rohingya situation. They are scheduled to visit the camps tomorrow (Monday).

He also thanked the people and the government of Bangladesh for receiving the refugees in a ‘peaceful’ and ‘humane’ manner.

The World Bank Group had begun to work on refugee situations in recent years because of the intervention of Secretary General Guterres when he was the UN high commissioner for refugees, Kim said.

“About five years ago he (Guterres) reached out to me and he said the World Bank has to be get involved because some of these situations last so long that they are not just refugee situations, they are development situations,” he said. “It was the vision of Secretary General Guterres five years ago that brought us into the picture.”

Kim highlighted the recently announced $480 million in grants by the World Bank to support the Rohingyas.

“We insist that generous, humane countries that support refugees should not be punished for that. That’s why, on the insistence of the finance minister, the citizens and the prime minister, we are doing everything we can to ensure that the resources come in the form of grants.”

The World Bank is also supportive of the UN agreements on the Rohingya issue, Kim said reiterating that the organisation would do all it could to help Bangladesh.

“And once again I want to say to the people of Bangladesh that the rest of the world is very grateful for your humane reception, but we also know that there is more to do – there is more work to do, there are more services to provide – and we are here to do just that.”

Kim said he along with the UN Secretary General expressed their gratitude to the people and to the government of Bangladesh for giving shelter to so many Rohingyas.

Finance Minister Muhith thanked Kim for his visit, saying it was a great pleasure that the visit came at this ‘critical hour’ for the nation.

“It’s simply very critical because this country has had the advantage of being refugees in other countries and we can never forget it. Therefore, we have taken in the refugees with open arms,” he said.

“But, certainly we want them to go back to their country with dignity and safety. This is all that we want and there we are getting the support of the international community in a big way.”