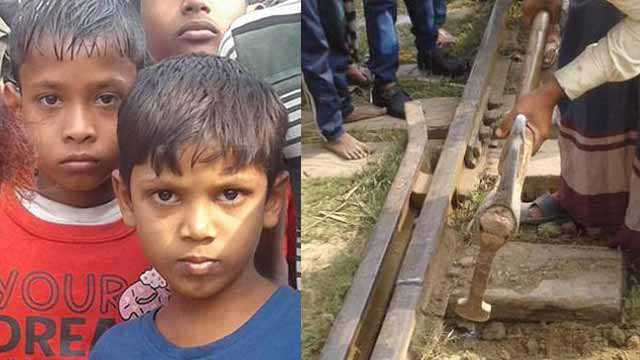 They are Sihabur Rahman, 6, son of Sumon Ali, and Titon Ali, 7, son of Shahidul Islam.

Nayan Ahmed, station master of Arani stattion at Bagha, said there was a bang when inter-city train the Silk City moved past Jhina Rail Gate.

Sihabur and Titon, who were returning home from the field, rushed to the spot and found that the rail tracks had severely been damaged.
Another train was soon approaching the rail gate and the brave kids started waving their scarfs over their heads.

"I did not take them seriously at first," said KM Mohiuddin, the locomaster. "I was getting very close, but they did not look like stepping aside. So, I had to stop in the end.

Mohiuddin's goods train was transporting oil from Khulna to Rajshahi.
Station master Nayan was immediately informed and he had a few workers repair the rail tracks soon.

State minister for foreign affairs Shahriar Alam, who is the local MP, has announced a monthly stipend of Tk 1,000 for both the boys. He has also declared to bear their educational expenses, should they choose to go for higher studies on completion of the higher secondary level.