8 killed in road crashes across country 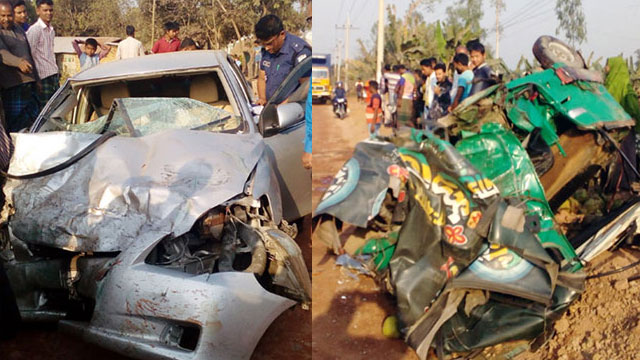 At least eight people were killed and nine others injured in separate road accidents in Barishal, Dinajpur, Narail, Bogura and Dhaka districts.

In Barishal, a woman was killed and three other people were injured in as a bus crashed into a human-hauler on Barishal-Patuakhali highway in Rupatoli area on Saturday morning.

The deceased was identified as Renu Begum, 50, wife of Rouf Hawlader, a resident of 25 no ward of Rupatoli area.

Sub-inspector Mostafizur Rahman of Kotwali Model Police station said that the accident took place around 9am when the Patuakhali-bound bus collided with the human hauler, leaving its four passenger injured.

The injured were taken to Barishal Sher-e-Bangla Medical College Hospital where doctors declared her dead.

In Dinajpur, a college teacher was crushed under the wheels of a truck at Kolabari of Ghorashal Upazila.

The deceased was identified as Anwar Hossain Ujjal, 32, lecturer of Raniganj Mohila College. Agitated locals seized the truck and handed it over to police.

In Narail, two friends were killed and another injured as a truck collided head on with a motorcycle carrying them in Bagudanga Bottala area of Kalia-Chapail road in Kalia upazila.

The deceased were identified as Biplob Ghosh, 15, and his friend Shanto Biswash, 15, of Jogania village of the upazila.

In Bogura, a car collided head-on with an auto-rickshaw killing three people and injuring five others.

The deceased were identified as Shamol Sohon, 55, Afzal Hossain, 45, and Shahidul Islam, 65.

Officer-in-charge of Adamdighi Police Station Monirul Islam said the accident injured eight people and three among them succumbed to their injuries on the way to hospital.

In Dhaka, a man was killed as a speeding bus run over him in front of Sayedabad Bus Terminal in the afternoon.

Later he was taken to DMCH where the doctors declared him dead, he added.