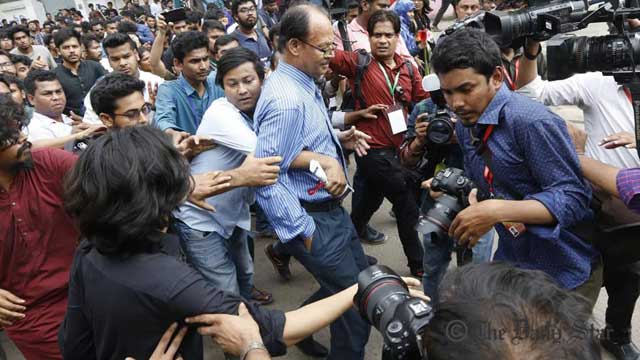 The opposition panels, who boycotted the Ducsu election bringing allegations of vote irregularities and rigging, will stage a demonstration on the university campus tomorrow demanding cancelation of the just ended election.

They will stage a demonstration at the Raju Sculpture and boycott classes demanding fresh election and removal of the university vice-chancellor, our DU correspondent reports from the campus.

Liton Nandi, vice-president candidate from the Progressive Students' Alliance and Anti-Imperialist Students' Union panel, came up with the announcement on behalf of the activists of the quota reform, independent, Chhatra Federation and other panels this evening.

Liton, also general secretary of Chatra Union of the DU unit, called upon all the students not to attend their classes if the election is not cancelled and its result is announced by this night.

However, he also asked the students not to consider the demonstration programme as a “student strike”.

What began as a means to end the 28-year-long wait for Dhaka University Central Students’ Union (Ducsu), led to an eruption of protests at campus.

Mass protests rolled out to the streets of campus after the opposition panels boycotted the Ducsu election alleging irregularities and vote rigging.

The activists of the panels of quota reform, independents, Chhatra Federation panel and leftists staged a sit-in near the vice chancellor residence demanding fresh election.

Jatiyatabadi Chhatra Dal activists also took position near the residence independently for a little while demanding likewise and resignation of the VC.

Additional police were brought in to clear the entrance of the VC’s residence around 2:00pm. Security deployment was increased around VC Chattar.

Agitating students also encircled Ducsu’s Chief Returning Officer SM Mahfuzur Rahman before the latter managed to go away with the help of other students.

Mass irregularity was reported from two girls’ halls – Rokeya Hall and Bangladesh-Kuwait Maitree Hall. Proof of irregularities were found there.

The provost of Kuwait Maitree Hall was relieved of her duties and replaced by university administration after finding proof of stamped ballots.

Also, after three hours of protests over suspected discrepancy over ballot boxes, girls of Rokeya Hall found stashed empty ballots in the hall, hidden from the election process.

There were complaints from boy’s halls that ruling party activists were hindering voting by making queue longer by standing in line even after voting.

A Ducsu vice president candidate Nurul Haque Nur was assaulted at Rokeya Hall and another attack was attempted on another VP candidate Liton Nandi.

Amid protest, the authorities of the both halls suspended the voting. Later, the voting was resumed around three hours of suspension.

The voting began at 8:00am and continued till 2:00pm. Though the election began with a festive atmosphere in the morning, the situation started deteriorating as the opposition panels staged demonstration bringing allegations of vote rigging and ballot stuffing.

The election was of particular significance because the last Ducsu election was held 28 years ago, and was the opening for students’ union election to other public universities.