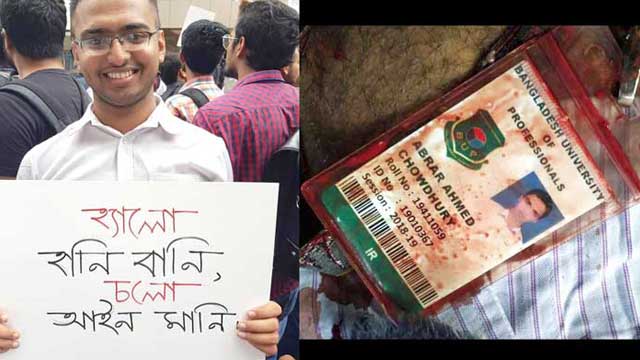 The Supreme Court has upheld the High Court's order that Suprobhat Paribahan, within seven days, must compensate Abrar Ahmed's family with Tk10lakh.

Previously, on 20 March, the High Court directed Suprobhat Paribahan to give Tk10 lakh after hearing a petition seeking compensation for the victim's family.

The court also issued a ruling asking the authorities concerned, and the bus company, to explain within four weeks why they should not be directed to compensate Abrar's family with Tk5 crore.

In the edict, the court asked government officials to provide reasons why the constant failure of the government to prevent road accidents should not be declared illegal.

In the morning of March 19, Abrar Ahmed Chowdhury, a first year student of Bangladesh University of Professionals (BUP)—and also a road safety activist himself—was run over by a Suprobhat Paribahan bus, at Nodda on Progati Sarani area, and killed on spot, as he was trying to cross the road.