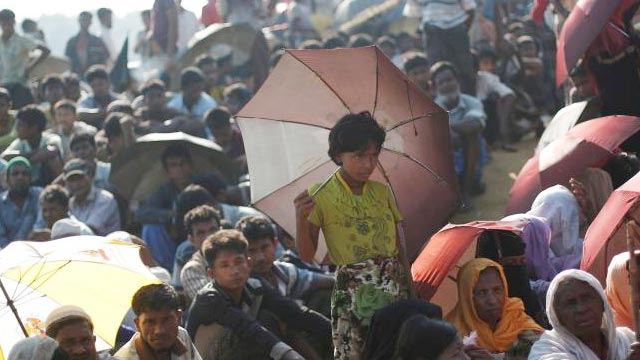 The United States government will stand strong on resolving Rohingya issue as well as holding perpetrators in Myanmar accountable for committing crimes of atrocities against Rohingyas, reports BSS.

US Vice President Mike Pence made the remark on Thursday expressing concern on the violation of very basic right of Rohingyas in Myanmar.

Pence was delivering keynote address at the 2nd Ministerial meeting on “Advancing Religious Freedom” participated by delegates from 106 countries with 40 foreign ministers at Washington DC, a press release issued by foreign ministry said on Friday (Jul 19).

Bangladesh foreign minister DR AK Abdul Momen attended the meeting hosted by the US Department of State at the invitation of US Secretary of State Mike Pompeo.

In his opening speech, Secretary Pompeo reinforced that ensuring religious freedom for all remains the top foreign policy priority of the USA.

He called for collective efforts of all the participating countries to ensure the freedom of thoughts, freedom of conscience and religion as reflected in the US Constitution.

In his speech, Dr Momen thanked the US government and the international community to extend support to host 1.1 million Rohingyas in Bangladesh.

Saying that Bangladesh being a land of humanity, has shown generosity at the cost of its own, he called the international community to increase pressure on Myanmar to take back their people from Bangladesh.

The foreign minister highlighted the commitment of the Bangladesh government to ensure basic rights of its people.

He mentioned that inspired by the call of the Father of the Nation Bangabandhu Sheikh Mujibur Rahman, Bangladesh has been relentlessly working to maintain the religious rights of all sects of people.

He elaborated how Bangladesh government is maintaining a ‘Zero Tolerance’ approach to any form of violence and discrimination, under any pretext, against religious minorities, and successfully prevented rise of extremist contents in Bangladesh.

The non-communalism character and peaceful coexistence has resulted in the unprecedented socio-economic growth of Bangladesh economy, the foreign minister said.

Momen said Prime Minister Sheikh Hasina promotes a national slogan “Religion unto individual, festivals unto all”, to endorse religious tolerance and create a sense of accommodation among religious sects.

The foreign minister observed that at times certain media is disseminating hatred and violence against selected religious groups.

He called for the media to play a constructive and responsible role in promoting religious freedom, thereby supporting peace and stability.

Dr Momen reiterated that violence and wars emanate from a mindset of hatred and ignorance. Therefore, in order to have sustainable peace and stability across nations, he called for creating a mindset of tolerance, a mindset of respect for others irrespective of religion, ethnicity, colour and background.

Everyone including religious, social, community, academia, and media leaders must work together in collaboration and partnership to create such a mindset, he observed.

On the sidelines of this conference, Dr Momen held bilateral meetings with his counterparts of Hungary, Iraq, Bahrain, and Malta.