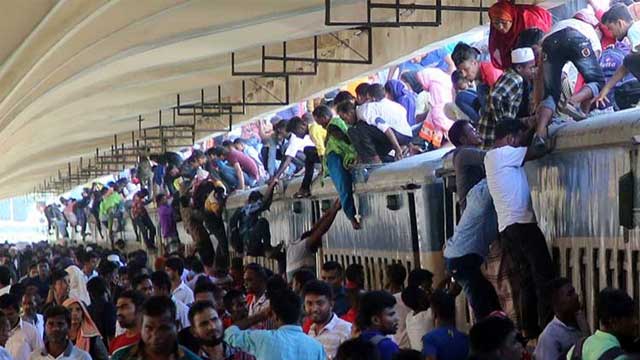 Sufferings of Dhaka-bound train passengers intensified on Sunday during post-holiday rush following celebration of Eid-ul-Azha in different districts across the country.

For the fourth consecutive day, most trains on northern and southern routes were late by up to 13 hours.

At Paturia and Aricha ferry ghat areas staffs of bus companies continued to charge three to four times higher fares from Dhaka-bound people while they opted to travel by trucks, pickup vans and legunas risking their lives.

Train journeys were the most excruciating both ahead of and after Eid as passengers suffered immensely due to late schedules of trains on northern and southern routes.

The pre-Eid ordeal was repeated in post-Eid return journeys since Wednesday.

Since morning, thousands of people reached Kamalapur railway station by trains while almost all trains on Panchagarh, Rangpur, Rajshahi, Lalmonirhat and Khulna routes were delayed.

Till writing of this report at 6:30pm on Sunday, Rangpur Express on Rangpur-Dhaka route was running at least 12 hours and 50 minutes behind its schedule.

Nilsagar Express on Chilahati-Dhaka route was running nine hours and 16 minutes behind its schedule.

On Rajshahi-Dhaka route Silkcity Express was late by six hours and five minutes as it left Rajshahi at 01:35pm instead of its scheduled time which was 7:30am and it was running around seven hours behind its schedule till 6:30pm.

Padma Express on Rajshahi-Dhaka was scheduled to set off for Dhaka from Rajshahi at 4:00pm, whereas it did not even start the journey at 6:30pm.

Bangladesh Railway officials said that the delay was caused by damaged rail tracks as well as time taken by passengers to board and leave the trains.

New Age Correspondent in Manikganj reported that since Sunday morning thousands of passengers of south and south-western districts started to throng Paturia and Aricha ghat areas while they had to pay extra to go to Nabinagar, Savar and capital Dhaka.

Nabin Baran and Jatri Sheba paribahans charged up to Tk 250 from each passenger on Aricha-Gabtoli route instead of Tk 60.

Some of the passengers were seen waiting for hours before they could begin their journeys and some were seen getting on trucks, pickup vans and legunas to travel cheap.

A press release issued by Dhaka Road Transport Owners’ Association on Sunday said that the association general secretary Khandakar Enayet Ullah gave show cause and took punitive actions against seven companies while they were on their way to Saidabad inter-district bus terminal for charging extra during Eid holidays.

The association conducted an investigation in this regard and found that the allegation was authentic.