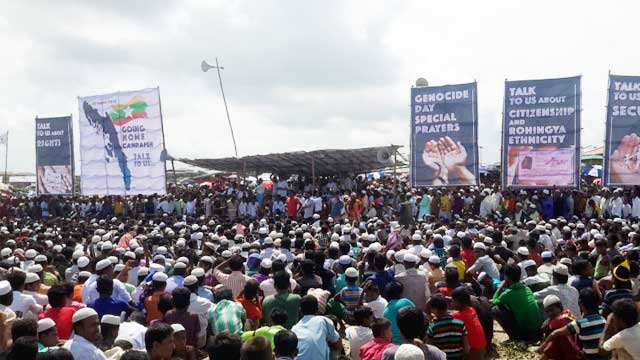 Thousands of Rohingyas staged a huge rally in Ukhiya on Sunday demanding that the international community step up pressure on Myanmar to meet their 5-point demand, including repatriation, citizenship and trial in the international court of those involved in killing and persecution.

The Rohingyas, holding placards and banners, started gathering at extension-4 of Kutupalong Camp in Ukhiya upazila around 9 am as part of their scheduled programme, marking the two years of their exodus from Myanmar amid persecution there.

The other demands include their safety and compensation.

They staged the rally amid escalating tension in the coastal district following the killing of a Jubo League leader, Omar Faruk, in Teknaf reportedly by Rohingyas on Thursday night.

Later, on Friday, hundreds of agitated locals barged into a Rohingya camp and vandalised makeshift houses and NGO offices.

Since 2017, two other locals were killed, allegedly by Rohingyas, while there have been reports of attacks on police and harassment of journalists by the forcibly displaced Myanmar nationals.

Sources in the police and locals say seven criminal gangs of Rohingyas are active at the camps in Ukhiya and Teknaf. The ‘Abdul Hakim Gang’ is the most notorious of them. Its members are accused of abduction, extortion, killing, Yaba smuggling, human trafficking and rape.

Nearly 1,100 Rohingyas have been accused in 471 cases -- 208 of them related to narcotics -- since the influx began in late August 2017, Police Superintendent of Cox’s Bazar ABM Masud Hossain said.

He said 43 Rohingyas were killed in the last two years in internal conflicts among these gangs while 32 others died in gunfights with security forces.

They said they will return to their homeland only when their safety and security are ensured.

Commissioner of Refugee Relief and Repatriation Commission (RRRC) Abul Kalam said, “August 25 is a difficult day for Rohingyas. They can hold a rally on this day .That’s why the authorities concerned have allowed them to hold the rally.”

Though there was a huge turnout of Rohingyas t the rally, there had been no unpleasant incident during the rally, said Ukhiya thana officer-in-charge Abul Mansur.

The first batch of Rohingyas was scheduled to return on November 15 last year but it was also halted amid unwillingness of Rohingyas to go back -- for lack of a congenial environment in Rakhine.

Bangladesh is now hosting over 1.1 million Rohingyas most of whom entered the country since August 25, 2017. The two countries signed a repatriation deal on November 23, 2017, but there has been little progress.

As the repatriation process hit the sang, Bangladesh on Sunday urged Myanmar to fully concentrate on implementation of its obligations and commitments necessary for a durable solution to the Rohingya problem.

In a media statement, the government said Bangladesh has ensured all the necessary arrangements on Bangladesh sides, including security and logistics, for the voluntary return of Rohingyas to northern Rakhine.

"It’s Myanmar’s responsibility to create a conducive environment in Rakhine through decisive actions and reduce the trust-deficit of Rohingyas through appropriate measures, including the dissemination of authentic information on the ground reality," the media release added.