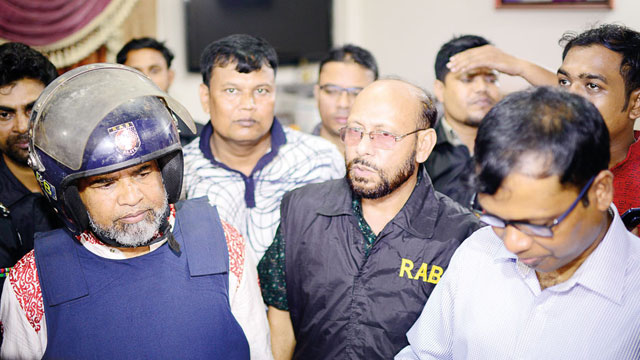 As part of the ongoing crackdown on casinos, members of Rapid Action Battalion (Rab) have recovered cheques worth Tk6.77 crore, Tk1 crore in FDR, and Tk2 lakh in cash during a raid at the Mohammadpur residence of DNCC Ward Councillor Habibur Rahman Mizan.

Earlier in the morning, a team of Rab-9 conducted a drive at Srimangal upazila of Moulvibazar district and arrested Councilor of Ward no-32 of Dhaka North City Corporation (DNCC) Mizan alias Pagla Mizan.

RAB Executive Magistrate Sarwoer Alam confirmed the matter to the reporter at his house located on Aurangazeb Road in the evening.

He also said that a team of RAB conducted a raid at Mizans friend's house in Sylhet’s Srimangal around 5am and detained him. The elite force also recovered a pistol, four bullets, a magazine and Tk2,00,000 cash.

"However, we did not find anything at his office," he added.

However, he did not say from which bank Mizan took the money and for whom. It is suspected that he withdrew the money as he was trying to flee abroad, the executive magistrate added.

No income, but houses in Texas, Sydney

The RAB executive magistrate said they could not determine the sources of Mizan's money. Mizan did not have any source of income except the monthly honorarium from the city corporation, and rent of around Tk90,000 from his three houses.

Mizan has houses in Texas, USA and Sydney, Australia. He also owns three expensive cars in the two countries.

"We suspect that he has illegal income. We will investigate the matter," said Sarwoer.