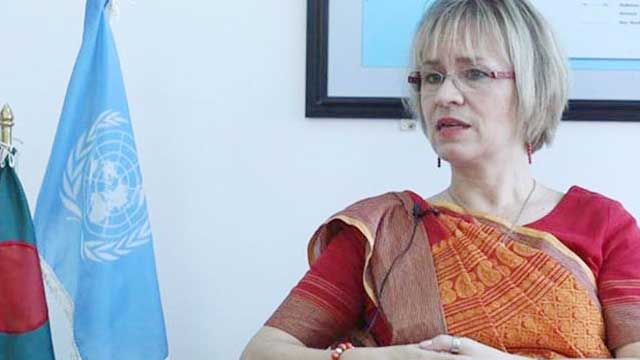 The Ministry of Foreign Affairs has summoned UN Resident Coordinator in Dhaka Mia Seppo over the intergovernmental organisation's statement on the murder of BUET student Abrar Fahad.

Seppo met with the foreign ministry's Director General of the UN Wing Nahida Sobhan at 11am on Sunday.

A foreign ministry official said she was called to explain the UN's statement on the incident.

The body of Abrar, a second-year student of electrical and electronic engineering of BUET, was found on the staircase of his hall in the early hours of Monday.

He was reportedly beaten to death by Bangladesh Chhatra League operatives on Oct 6 for a post he made to Facebook protesting against a recent deal between Bangladesh and India.

Firstly, Bangladesh objected to the UN's assertion that Abrar was killed as a result of exercising his freedom of expression, according to the official.

"The deal with India has been the subject of much conjecture across various platforms. The government didn't stop anyone from expressing their views. It wasn't even aware of what Abrar had written on his Facebook post," the official said.

"Secondly, the UN aren't seen issuing any statement when a student is killed in the developed world. But then why do they link such incidents in Bangladesh to a suppression of free speech?"

Following the murder of Abrar, the UN had said it "deplores the killing of a young BUET student, allegedly for freely expressing his views."

"Campus violence in Bangladesh has over the years affected and claimed too many lives, with apparent impunity for those bearing responsibility.”

“The UN Bangladesh notes steps taken by the authorities to apprehend alleged perpetrators. It encourages independent investigations that should lead to justice being served in a fair process, and measures to ensure prevention of further incidents," the organisation added.

It also emphasised that the freedom of speech is a human right and said "nobody should be harassed, tortured or killed for exercising it.”