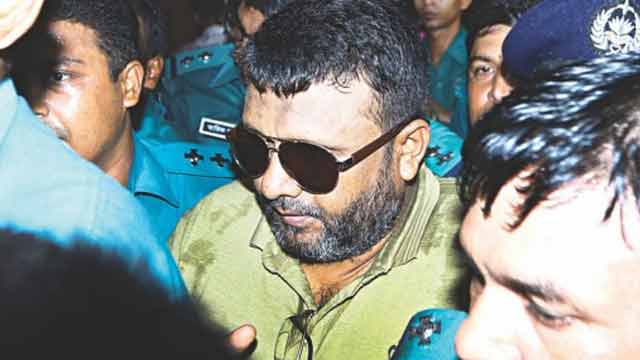 The High Court (HC) today fixed November 3 for passing an order on a bail petition filed by suspended officer-in-charge of Sonagazi Police Station Moazzem Hossain in a case filed on charges of recording statement of Feni madrasa student Nusrat Jahan Rafi and circulating the video on social media.

The HC bench of Justice M Enayetur Rahim and Justice Md Mostafizur Rahman set the date after concluding hearing on the appeal.

During the hearing, Moazzem’s lawyer Advocate Abdul Baset Mazumder prayed to the HC for granting bail to his client saying that he did not circulated the video and has been suffering in custody for a long time.

Meanwhile, Deputy Attorney General Sarwar Hossain Bappi opposed the appeal of Moazzem saying that the trial court has already recorded statement from eight witnesses and is scheduled to record the statement from the investigation officer (IO) of the case on October 30.

At this stage, Moazzem cannot be granted bail, he argued.

Moazzem submitted the bail petition to the HC on July 31 through a lawyer, Advocate Rana Kawser, in the case filed under the Digital Security Act.

On April 15, Supreme Court lawyer Syed Sayedul Haque Suman filed the case with Dhaka Cyber Tribunal against Moazzem for recording the statement of sexual assault victim Nusrat on camera without her consent, and circulating it on social media.

Nusrat, a student of Sonagazi Islamia Senior Fazil Madrasa in Feni, made national headlines after she was set on fire on April 6, allegedly for refusing to withdraw a case filed against madrasa Principal Siraj Ud Doula for sexually harassing her.

With 75 per cent burns, she was admitted to Dhaka Medical College Hospital.

After fighting for her life, she succumbed to her injuries at the hospital on April 10.

Her death triggered a huge public outcry across the country.

A video clip shows Moazzem asking Nusrat some humiliating questions did the rounds on social media, drawing widespread criticism. Nusrat had gone to his office to file a complaint against Siraj.

OC Moazzem Hossain was withdrawn as Nusrat’s family alleged that he was not cooperating with them. He was suspended on May 8 over negligence of duty and attached to the office of DIG (Rangpur range).

Police arrested Moazzem from the Supreme Court area on June 16. The following day, a Dhaka tribunal rejected his bail petition and sent him to jail.

On July 9, another HC bench rejected the bail petition of Moazzem in the case, saying that Moazzem utterly failed to protect the life of Nusrat and damaged police department’s image.