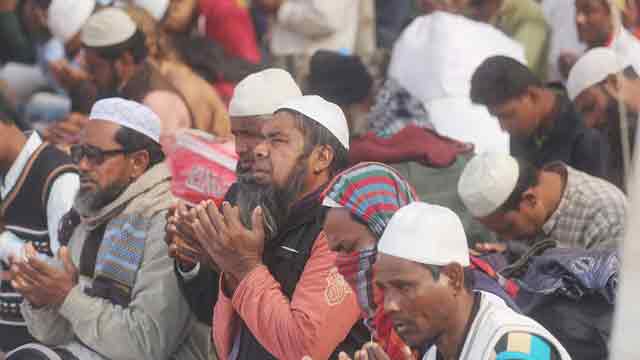 Dhaka, Jan 21 (Just News): The second phase of the 53rd Bishwa Ijtema, a congregation organised by Tabligh Jamaat, on the bank of the River Turag at Tongi in Gazipur, ended on Sunday morning with the Akheri Munajat (concluding prayer).

Hundreds of thousands of devotees from home and abroad joined the concluding prayer wherever they managed to sit or stand at or outside the venue.

The devotees sought peace, happiness and wellbeing of the Muslims around the world during the Akheri Munajat of the three-day event, the second largest congregation of the Muslims after Hajj.

Kakrail mosque imam Maulana Mohammad Zubayer conducted the 25-minute-long prayer in Bangla that started around 10:20am.

Maulana Mohammad Zubayer also conducted the concluding prayer of the first phase of Bishwa Ijtema in Bangla as senior Tabligh leader Maulana Saad Kandhalvi from Delhi, who had delivered the beginning sermon and led the concluding prayer for last few years, went back from Bangladesh without attending the Ijtema amid the protests by followers of a section of Tabligh Jamaat shura members.

Organisers said a number of six devotees including international citizen died in two phases of the congregation.

The first phase of the congregation was held between January 12 and January 14.

The first Ijtema was held at Kakrail Mosque in Dhaka in 1946. This was followed by a congregation at Chittagong Hajji camp in 1958.