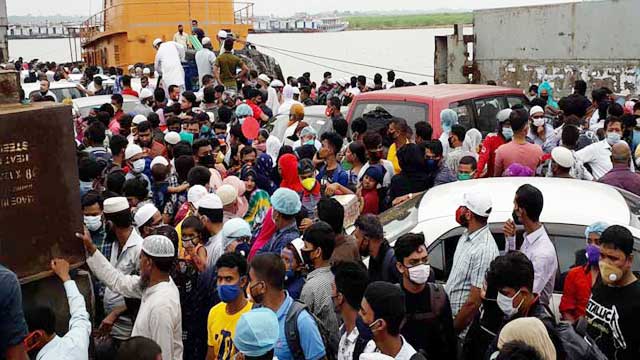 Thousands of people have gathered at the Shimulia-Kathalbari ferry terminal to reach to their ancestral homes to celebrate Eid-ul-Fitr with their families defying government directives.

The surge in the crowd has increased from Sunday morning, as the ministry decides to celebrate Eid-ul-Fitr in Bangladesh on Monday.

On a field visit, no social distancing or health protocols were seen to be maintained in the hugely crowded terminal premises and the vehicles and that can lead to the communal spread of coronavirus worse, sources said.

“Although the crowd was less following the suspension order a few days back, homeward bound people are crowding the terminal again from Sunday morning, he added.

Not only the ferries are over-crowded, but people are also using unauthorised speed-boats to reach to their destination, which is very risky, a terminal source said seeking anonymity.

When asked about the matter, Senior Assistant Superintendent of Police (Traffic) Nazmur Raihan said: “The designated officer who used to monitor the speed-boat terminal, is under home quarantine. Taking advantage, two speed-boats were operating on the route illegally.”

“The operation has been terminated since and we sent police to monitor the matter,” added the official.