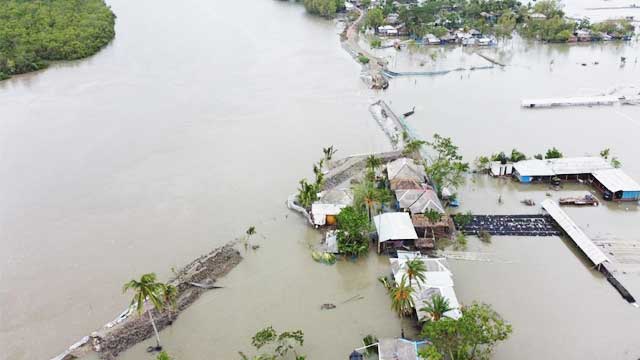 Unavailability of drinking water causing much hardship for people in the coastal areas of Satkhira after they were hit by cyclone Amphan on Wednesday.

As enclosures got damaged, the areas were flooded by saline water from the Kapotakkha and Kholpetua Rivers, affecting the ponds and tubewells in the areas.

Rojina Begum, a local of the union, said: "We can see water everywhere but none is suitable for drinking. We don't want anything, only water to survive."

Expressing a similar sentiment, Abdullah Al Mamun, of Lakshikhali village in Gabura union, said they could not bring water from other sources as deep tubewells and roads were flooded.

"Although relief products are being distributed by government and non- government organizations, we couldn't avail those being in the middle of the area that was flooded."

Shyamnagar Upazila Nirbahi Officer Anam Abuzar Gifari said: "We have been distributing drinking water with relief products through volunteers in the upazila. Army members have also been volunteering. We will overcome the crisis soon."