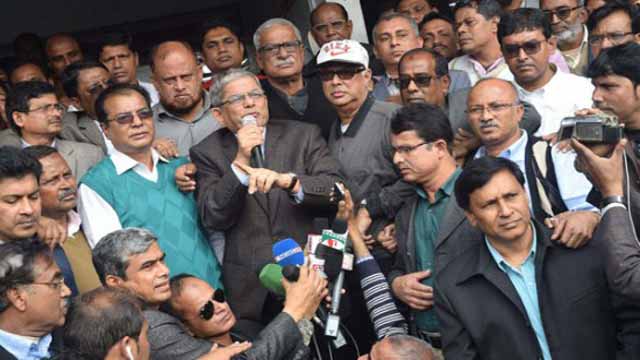 "You've a chawal (son) of Rangpur who is now staying here. He (Ershad) did nothing for Rangpur. He's now working together with fascist Awami League government forging an alliance with it," he said.

Addressing a wayside rally at CO Bazar, the BNP leader further said, "He came here with me in the same flight carrying the [national] flag. He took the flag making the alliance with the government which is killing our sons. We won't make any compromise with them."

While Fakhrul was addressing the rally, Ershad in a vehicle flying the national flag with police protocol crossed the CO (Circle Officer) Bazar road towards the city, witnesses said.

Earlier, Ershad and Fakhrul left Dhaka for Saidpur in a flight of US-Bangla Airlines around 10:30am.

Seeing Ershad in the flight, Fakhrul stood up, shook hands with him and exchanged pleasantries.

Rangpur City Corporation goes to polls on December 21 while the curtain on the election campaign falls on Tuesday midnight.

Reaching Rangpur around 1pm, Fakhrul started electioneering in favour of Babla at CO Bazar. He distributed leaflets of Babla to people of all walks of life there and later addressed the wayside rally.

He called upon people of Rangpur to cast their votes for Babla maintaining discipline and rules without responding to any provocation.

Fakhrul also urged them to guard the polling stations until the votes are counted so that Awami League cannot rig the polling.

The BNP leader said the Rangpur polls are very important for the national politics. "We'll be able to give the fascist regime a message through the election that people don't want you to stay in power any more. So, you (people) will have to now decide whether you'll take position in favour of peace or the fascist regime."

He also slammed the government for soaring the prices of essentials, hike in the prices of utility services, unbridled corruption and repressive acts.

Fakhrul said the government is harassing those who raise their voice against it by implicating in false cases. "Asif Nazrul is facing 26 cases while The Daily Star editor Mahfuz Anam 185 cases for expressive alternative opinions."

The BNP leader together with Babla carried out electioneering at different parts of the city for nearly two hours.