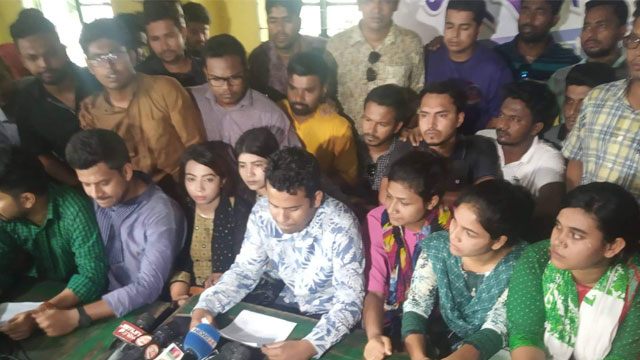 They alleged that positions in the central committee have been given to non-students, drug abusers, drug dealers, accused by law and disputed individuals.

The deprived faction brought forth the allegations at a press conference at Modhur Canteen today, also threatening to quit the party if actions are not taken.

They demanded punishment of those involved in attacking the activists of the deprived faction.

The pro-Awami League student body Chhatra League yesterday announced its 301-member full-fledged central committee, touching off controversy and demonstration by some of those who could not make it to the new committee.

According to the BCL constitution’s section-5 (Ga), married, non-student, businessman and employers cannot get any post in the committee. But its incumbent president and general secretary have picked some “controversial” people, ignoring many dedicated leaders and activists, said sources in the student body.

At least 200 deprived leaders and activists staged demonstration on the Dhaka University campus in the evening, protesting the inclusion of controversial persons in the central committee. At that time, at least 20 BCL activists were hurt in an attack carried out by followers of many securing posts.

An attempt to hold a press conference at Madhur Canteen in the evening was foiled in the attack.

Some BCL men threw chairs and brickbats at the others around 7:30pm, alleged Rakib Hossain, a former BCL central committee leader.