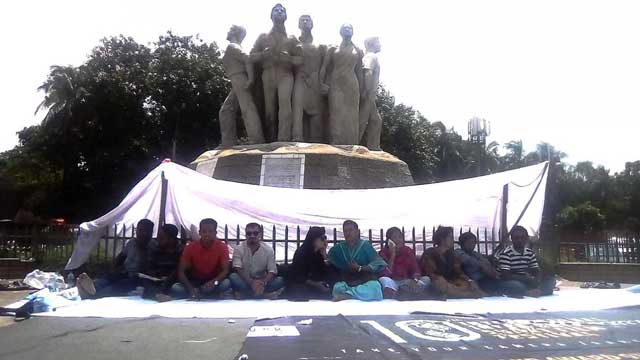 The protesting faction of Bangladesh Chhatra League (BCL) has resumed demonstration alleging that the controversial new central committee is getting validated.

After a week, they started a sit-in from the wee hours, at the base of Raju Sculpture, Dhaka University, after central BCL issued a notice that it’s new committee would pay their respects at the mural of Bangabandhu Sheikh Mujibur Rahman in Dhanmondi today.

“By placing wreath at the base of Bangabandhu, the new controversial committee will get validated,” BM Lipi Akhter, president of Rokeya Hall Chhatra League, told.

Another protestor, Rakib Hassan, former planning affairs secretary of the student front, told The Daily Star that this decision of the central committee is against the decision of central Awami League and its President Sheikh Hasina.

“Prime Minister Sheikh Hasina had ordered to exclude those controversial from the new committee. They are violating the order,” he claimed.